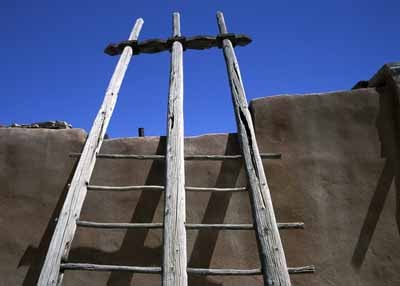 Only on feast days do all the Acomans gather on the mesatop.

In 1598, Spanish conquistador Don Juan de Onate crossed the Rio Grande near the city limits of modern-day El Paso, Texas. De Onate led his party north past Franciscan missionaries along the Rio Grande's banks to its intersection with the Chama River. Here he established the San Gabriel Mission, New Mexico's second Spanish capital, in 1600 -- a full seven years before the English settled in Jamestown, Virginia. This first Spanish mission in modern-day New Mexico set the stage for many more to come. Many of the state's 17th-century churches are still standing, and active, to this day.

In 1610, the Spanish capital moved to Santa Fe, where San Miguel Mission, now considered the oldest operational church in the United States, was established. Another nicely preserved church from this early era is the Mission of San Jose at Laguna Pueblo (1699), 45 miles west of Albuquerque. About 25 miles to the southwest is the Mission of San Esteban del Rey at Acoma Pueblo, perched majestically on a 367-foot sandstone mesa since 1626. To the southeast are the ruins of four more 17th-century missions that were abandoned before 1700 and now comprise Salinas Pueblo Missions National Monument.

Perhaps its the mysticism suggested by the missions that gives New Mexico such a spiritual edge. Explore the other side of "other-worldliness" by visiting Roswell -- you can read more about it on the next page.

Quick Fact Acoma Pueblo is nicknamed "Sky City" for its lofty locale atop a sandstone mesa that rises 367 feet above the surrounding desert. Acoma Pueblo is the oldest continuously inhabited city in the United States. It was established prior to 900 a.d. The 70-acre site was chosen because of its defensible location. Regardless, Sky City was battered during the Spanish colonial period in the 1500s. In fact, Acoma Pueblo was nearly destroyed in 1598 when Don Juan de Onate led a group of 70 men up the sheer sandstone and took vengeance on the Acomans after an earlier quarrel.

The Spanish took control of the Pueblo and organized mass Catholic conversions and the construction of the Mission of San Esteban del Rey between 1629 and 1640. Less than 50 Acomans live year-round in the pueblo today; about 3,000 more live in nearby villages