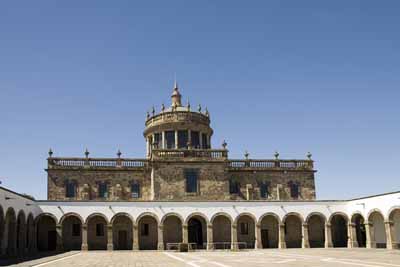 Buildings, plazas, gardens, and streets speak of the 450-year old history of Guadalajara.

At an altitude of almost a mile high, Guadalajara is a city of monuments, parks, and historic tree-lined streets. The city has been dubbed the "City of Roses," Mexico's Pearl of the West. The height of Spanish colonial art and architecture is evident throughout the city. Sterling examples include the University of Guadalajara, founded in 1792, and the historic district.

At the city's heart is its Centro Historico, where visitors can get acquainted with local history and colonial architecture. There's also the Cathedral Metropolitana de Guadalajara, the city's Metropolitan Cathedral. Begun in 1561 and completed more than a century later, the cathedral is capped by distinctive twin yellow-tiled steeples. Nearby is Plaza Tapatia, Guadalajara's largest plaza, which covers seven square blocks. It's best traveled by foot or calandria, traditional horse-drawn touring carriages.

While Guadalajara is not a resort town, there is plenty of golf, tennis, shopping, and restaurants for tourists to enjoy. There's also a zoo, a children's amusement park (Selva Magica), bullfights at Plaza de Toros Nuevo Progresso, and rodeos at Lienzo Charro de Jalisco. The city is blessed with a mild mountain climate, and its culture and history draw people from all over the world. Guadalajara is also known by some as the birthplace of mariachi music and the Mexican hat dance.