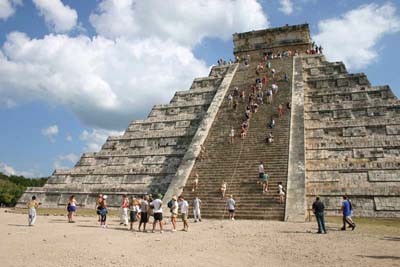 El Castillo, a huge stone pyramid in the ancient Mexican city of Chichén Itza, is a family vacation favorite, as children may climb to the top.

Engaging the whole family with Mexican history is easy to do when the past can be actively explored. When you come upon the ancient city of Chichén Itza, located on the Yucatan Peninsula in Mexico, its role as the seat of power in the Mayan world is vividly clear. Massive pyramids, huge stone courts, dozens of temples, and wide plazas are spread out across a vast grassy plain. Bas-relief carvings on the walls of many of the structures include scenes of daily life and depictions of fierce warriors, serpents, jaguars, eagles, and various other animals.

As you tour the area, it's quite easy to imagine life in the city during the Mayan Classic Period of A.D. 300 to 900. It is the most completely restored archaeological site in the Yucatan, and its scale is tremendous.

There are many engrossing sites to visit, but three in particular will prove fascinating to older children. At 75 feet tall, the great stone pyramid known as El Castillo is the tallest structure on the site. Climbing it is a highlight for most children, and from its peak they can survey the great city of Chichén Itza and the jungles beyond.

Northwest of El Castillo is Chichén Itza's ancient stone court, where Mayan men played a game called pok ta pok. Balls made of rubber harvested from native trees have been discovered in ancient tombs and are believed to have been used in the game, which involved hurling a ball through one of two stone rings located on either wall of the court. The captain of the losing team was decapitated as a sacrifice to the gods. Carved scenes on the court walls show Mayan ballplayers dressed in heavy protective padding. The carving further details a headless player kneeling while another player holding the head looks on. Be sure to test the acoustics of the court -- a whisper at one end can be heard at the opposite side, and if you clap or whistle, the echo reverberates throughout the court.

A short distance from the main section of Chichén Itza is The Sacred Cenote, a deep, steep-sided pool used for ceremonial purposes, where sacrificial victims were drowned. Archaelologists explored the cenote in the 20th century, and divers retrieved human remains and a fortune in gold and jade.

Exploring the many other fascinating archaeological treasures from this ancient civilization can take at least a full day. Plan your visit so you can see the evening sound-and-light show, a delightful spectacle of pomp and artistry.

For still more fun with Mexican heritage, continue to the next page to learn about Xcaret and Xel-Ha, where ancient culture combines with the attractions of a theme park.