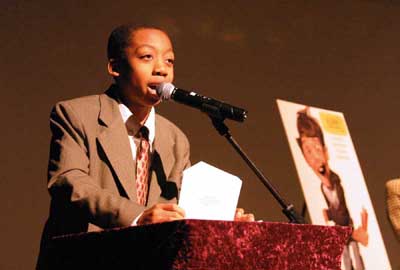 Photo Courtesy of Facets Multimedia A member of the children's jury awards a top prize at a recent festival. Children are able to get involved in every step of the film-making process.

North America's largest and longest-running festival of films for children, the Chicago International Children's Film Festival brings together some of the best animated and live action films from 40 different countries. The festival traditionally begins in October and spans an 11-day period. There is something to appeal to children of all ages, with special programs directed at four different age groups ranging between 2 and 13.

The films and videos -- dramas, documentaries, comedies, social commentaries, artistic vignettes, and animated shorts -- compete for recognition and prizes, and children who attend the festival vote for their favorites. One of the categories is Child-Produced Work, which features the works of aspiring filmmakers under the age of 18.

In past festivals, films such as The Raspberry Worm from Finland, The Little Monsterette from Switzerland, Domo-Kun and the Egg from Japan, and Runaway Bathtub from the United States have been presented. The films shown at the festival are carefully selected to present humanistic, nonexploitative, culturally diverse, and nonviolent work. The festival also sponsors a number of workshops for kids interested in making movies.

Continue to the next page to learn about Zoolights, the winter wonderland created every year at the Lincoln Park Zoo in Chicago.