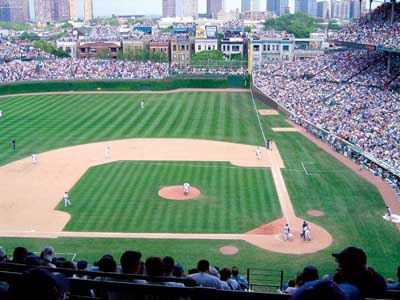 Fans flock to Wrigley to cheer on the Cubs -- some even crowd the rooftops of buildings on Sheffield Avenue beyond right field.

Chicago Cubs fans are among the most devoted fans of any sports team. Nowadays, most people worship winners. But the Cubs, a baseball team that has not won a World Series championship since 1908, are the most lovable losers of America's pastime. Both the Cubs and their fans prize their quaint home ballpark, Wrigley Field. Wrigley was built in 1914 for $250,000 and featured baseball's first permanent concession stand. It's the second oldest major league park, next to Fenway Park in Boston. And in 1988, it became the last MLB field to host night games when lights were finally added to the park.

The "Friendly Confines" of Wrigley are known for eccentricities. Fickle winds can change the outcome of the game: Watch for home runs when the breeze blows toward Lake Michigan. And hard-hit balls have been getting stuck in the ivy-covered outfield walls since they were erected in 1937.

Wrigley's capacity is relatively small -- a mere 39,538 (with the new seats added in 2006), plus the apartment rooftops across Sheffield and Waveland Avenues. However, any seat will yield a great view of the playing field (the park is well-known for this attribute). Most games are sellouts, but it's worth it to grab a ticket, hot dog, and beer and sit among the famous Bleacher Bums. Afterward, join the untiring Cubs fans at neighborhood bars and restaurants just steps from Wrigley.

Illinois isn't called the "Land of Lincoln" for nothing. Continue to the next page to learn why visitors should make a stop at Abraham Lincoln Presidential Library and Museum.