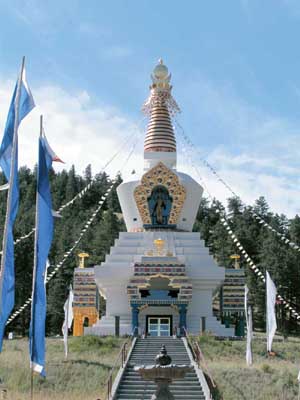 Cradled in the pine-clad mountains near Red Feather Lakes, Colorado, the Great Stupa of Dharmakaya is the largest stupa (monument to a great Buddhist teacher) in the western hemisphere. It is also the largest and most elaborate example of Buddhist sacred architecture in North America.

The monument was built in honor of the great Buddhist teacher Chögyam Trungpa Rinpoche (1939-1987), the founder of the Shambhala movement and one of the key figures who helped introduce Tibetan Buddhism to the United States. He established more than 100 meditation centers across the United States and founded the first Buddhist-inspired university in the country, Naropa University in Boulder, Colorado. His skull is encased in the large statue of Buddha in the chamber at the stupa's base, called the heart center.

Construction on the Great Stupa of Dharmakaya began in 1988, and the monument was consecrated in 2001. The 108-foot masterpiece is a mesmerizing work of ornate art, laden with meaningful symbolism and built to last a millennium. (The engineers behind it used reinforced concrete to maximize the stupa's durability.) Stupas in the West have come to represent the contrast between modern and ancient world views. The interior of the Great Stupa of Dharmakaya is spacious. Its design and artwork reflect a connection of Japanese aesthetics and Shambhala teachings.