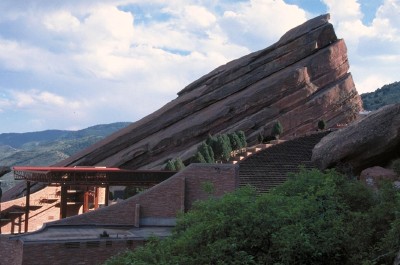 Colorado Tourism Office. The giant Creation Rock and Ship Rock frame Red Rocks Amphitheatre. The dramatic red rock formations that give the amphitheatre its name are both visually striking and accoustically ideal.

In Morrison, Colorado, Red Rocks Park and Amphitheatre is nestled in the stunning mountainside and natural red rocks. Its acoustics are superb, perhaps rivaled only by the beauty of its spectacular surroundings. The north and south sides of the amphitheatre are 300-foot geological masterstrokes named Creation Rock and Ship Rock, respectively. The seats stretch across the steep slope between the two.

In the early 20th century, John Brisben Walker hatched a plan to develop a world-class performance venue here. He went as far as building a temporary platform where he staged numerous concerts featuring leading stars of the East Coast opera scene. But Walker's vision wasn't fully realized until decades later.

In the 1920s, the city of Denver bought the land and enlisted the help of the federal government. Red Rocks Amphitheatre was completed in 1947; the venue's first annual Easter Sunrise Service, a tradition that continues to this day, occurred that first year. A "Who's Who" of the music world has taken the stage here, including Willie Nelson, the Beatles, Jimi Hendrix, and the Grateful Dead.

Continue on to the next page for details on family vacations to the Great Stupa of Dharmakaya, Shambhala Mountain Center.