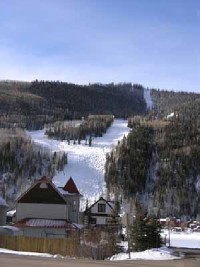 Tucked among the snow-capped Rockies, Telluride is a skier's paradise.

Telluride is one of the most alluring towns in the West. This picture-perfect Western boomtown is nestled in a snug box canyon and surrounded by forested peaks and idyllic waterfalls. It is the perfect blend of ski resort and historic community.

According to local legend, Telluride derived its name from a contraction of "to hell you ride," due to the difficulty of reaching the town in the 19th century. Telluride's beginning years in the late 1800s were marked by ambition. The silver veins in the surrounding mountains proved exceptionally rich. The newfound wealth of the town lured outlaws such as Butch Cassidy and the Sundance Kid -- Butch's first bank robbery was at the San Miguel Valley Bank in downtown Telluride.

The town became one of the world's first electric communities, boasting electric lighting even before Paris, the "City of Lights." But Telluride's mining economy faltered after World War I, beginning a long, slow period of decline. The United States Postal Service gave up on the town, and the population dropped to 600. Downtown lots sold for as little as $100, and many structures began to deteriorate. But in 1972, the Telluride Ski Resort was born, and the population of miners gave way to Bohemians.

The town's destiny -- which at one point appeared to be total abandonment -- changed suddenly. The entire town has been a National Landmark Historic District since 1964, and this status has kept its lovely character intact.

Continue to the next page to read about Pike's Peak.