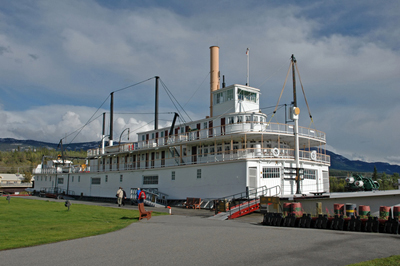 Dry-docked on the banks of the Yukon River, the S.S. Klondike has been established as a National Historic Site in Whitehorse, Yukon Territory, Canada.

The population of the Yukon Territory in Canada is 30,000, give or take a few hardy souls. More than 23,000 of those people live in the capital city of Whitehorse, which was known as a prospector's paradise during the Klondike gold rush of the late 19th century. While once the source for legends and lore, Whitehorse is now home to the SS Klondike, the preserved sternwheeler boat that once ferried goods and people along the Yukon River.

Dawson City is a town of just 2,000 people, but nearly 60,000 visitors come each year to see the literary shrines, including the cabins of Jack London and Robert Service. London wrote more than 50 books based on his experiences in the Yukon, Alaska, California, and at sea.

Service was the author of volumes of verse, such as The Spell of the Yukon. He wrote of the northern land where he found, "The snows that are older than history/The woods where the weird shadows slant/The stillness, the moonlight, the mystery."

The fabled high mountains, vast ice fields, and lush valleys of Kluane National Park and Reserve in southwest Yukon are astounding. The park has one of the most extensive nonpolar ice fields in the world. It's also home to Canada's highest summit, Mount Logan, at 19,545 feet.

Ivvavik National Park in the northwestern part of the territory is known for its migratory herds of porcupine caribou. The mountains there were never covered by glaciers, and V-shaped valleys and isolated conical hills are part of the frigid landscape.

Montreal, near a dormant volcano, boasts outdoor activities, as well as urban sites, such as the Notre-Dame Basilica. Keep reading to learn about the sites in Montreal.