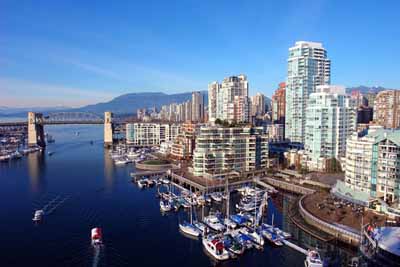 Day trips and city tours are plentiful in vibrant Vancouver.

Vancouver -- Canada's third largest city -- is the urban cornerstone of British Columbia and the nation's gateway to the Pacific Rim. The city glistens where the mountains seem to vanish into the coastline and then rise again on Bowen and Vancouver islands. From a distance, the city can look like a diamond cluster rising from the Strait of Georgia to the rolling Coast Mountains and the Fraser Valley beyond.

As Canada's west coast counterculture capital, Vancouver is an urban explosion with an environmental-minded style. The metro area has more than two million residents. The city is also known for its urbane thrills, its acceptance of alternative lifestyles, and a vigorous club scene.

Great green forests surrounding Vancouver lead to getaways up the fjords and rivers to adventures in Pemberton; up the Chilliwack River; in Cypress Provincial Park; and the in the Skagit Valley Recreation Area. There are three ski resorts within a half-hour drive of downtown -- Mount Seymour, Grouse Mountain, and Cypress Mountain. And the Capilano River, Seymour River, and Lynn Creek provide whitewater thrills come spring meltdown.

Canada's largest city, Toronto, is a world-class city with many ethnic neighborhoods. Keep reading to learn about the CN Tower and the kid-friendly Toronto zoo.