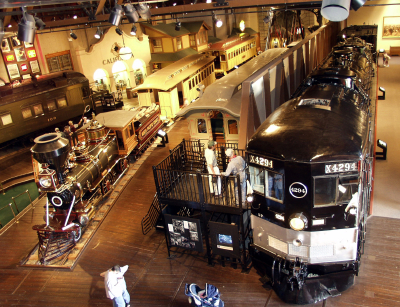 The impact of the railroad and how it shaped the history, culture, and economy of California and the West is told through the various exhibits in this vast Sacramento museum. You'll find 20 meticulously restored railroad cars and locomotives on display here. On the main floor, check out the Governor Stanford steam locomotive, the first engine used by the Central Pacific, and then get a close-up view of a huge diesel engine.

Several displays invite visitors to climb aboard for a closer look. Children can sit in the engineer's cab of a Santa Fe steam locomotive and experience the sounds and the rocking motion of a sleeping car on a pretend rail trip. Little ones can play with Thomas the Tank Engine trains and wooden Brio trains and tracks. A display entitled Small Wonders: The Magic of Toy Trains features some 1,000 vintage toy trains and an elaborate toy train layout. Between April and September, steam train excursions take visitors for a six-mile round-trip ride along the banks of the Sacramento River.