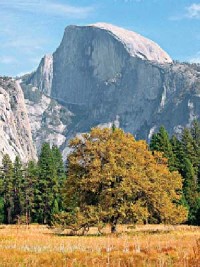 Half Dome, located at the eastern end of Yosemite Valley, is a breathtaking sight. The granite formation is an estimated 87 million years old.

The awesome sights of Yosemite's towering granite peaks, cascading waterfalls, glacial lakes, and giant trees attract families year after year. At the park's center is half-mile-deep Yosemite Valley, carved by glaciers during the last ice age. Sights like the soaring El Capitan, the majestic Half Dome, and the thundering waterfall of Bridal Veil are not to be missed.

It's no wonder American nature photographer Ansel Adams found much of his inspiration here, popularizing many of Yosemite Valley's granite landmarks in his black-and-white photographs.

The Ahwahnee Hotel, a grand hotel in a grand setting, is a popular stop for weary travelers. The hotel houses a collection of priceless Native American baskets as well as a display of unique Persian rugs.

A number of bike trails criss-cross Yosemite Valley, and the park also uses a fleet of shuttle buses to help control the flow of traffic during peak vacation months. To get a real sense of the park's majesty and the diversity of its terrain, explore the less visited parts of the valley by heading into its higher reaches, such as idyllic Tuolumne Meadows. This picturesque sierra meadow features clear mountain streams and stark granite outcroppings surrounded by snowcapped peaks. It serves as a trailhead for some of the park's most spectacular hikes.

On the next page, learn about the Monterey Bay Aquarium's hands-on, kid-friendly exhibits.