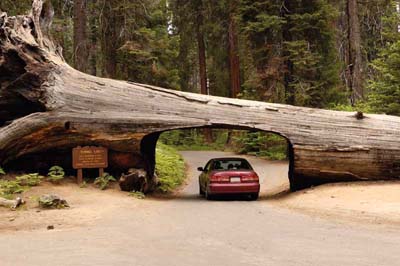 The drive-through in Sequoia National Park is open 24 hours! Before this sequoia fell in 1937, it stood 275 feet high. Rather than attempt its removal, the park service carved a tunnel through it that measures 17 feet wide and 8 feet high.

General Sherman is the leader among trees. This huge sequoia tops off at 275 feet -- as tall as a 26-story building. It is Sequoia's most famous resident and the largest living organism in the world. A gargantuan 36 feet in diameter, at approximately 2,500 years old, it's the oldest of its species. Thousands of General Sherman's relatives fill the pristine forests of these two spectacular national parks.

The best place to see these breathtaking giants is suitably named the Giant Forest, home to four of the five tallest trees in the park. Visitors also enjoy the park's diverse landscape, which includes deep canyons, granite cliffs, wildflower-filled meadows, and a wild river. An easy 1.7-mile hike starts near the Giant Forest and leads to a 1,200-foot waterfall that is especially dramatic in early summer when run-off from the melting snowpack is at its peak.

For stunning vistas that captured the imagination of Ansel Adams and many others, you'll want to pay a visit to Yosemite National Park. Keep reading to learn about the natural beauty to be found in this national park.