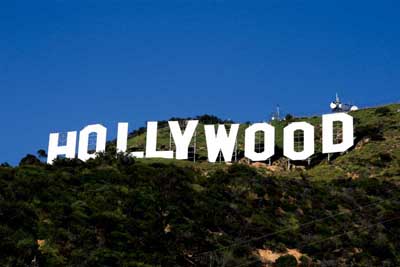 Nine 50-foot letters comprise one of the most recognizable signs in the world.

Hollywood is not just a place. In certain contexts, Hollywood is shorthand for America's film industry. In others, it's the destination for every aspiring actor, director, or screenwriter. It's also the setting for so many legends and rumors it's hard to keep them straight. Regardless, Hollywood is amazing. The rolling Hollywood Hills, clad in a lush layer of greenery, cradle neighborhoods of all kinds and feature the one-of-a-kind American icon, the Hollywood sign. At first, the sign was a real-estate promotion that read "Hollywoodland." But by 1973, it was in tatters -- one O had toppled, and a vandal had set an L on fire. This led to its $250,000 reconstruction in 1978.

Down below, on Hollywood Boulevard, the sidewalk sports 2,000 terrazzo-and-brass stars that immortalize giants of the entertainment industry. The street is a colorful spot for people-watching and is the address of Mann's Chinese Theatre, perhaps the most famous cinema in the world. The unmistakable theater has two enormous red columns out front, a bronze roof, and authentic furnishings imported from China. Cast in the cement of the forecourt are the footprints, handprints, and hoofprints of past and present movie stars.

Continue to the next page for details on family vacations in lively Venice Beach.