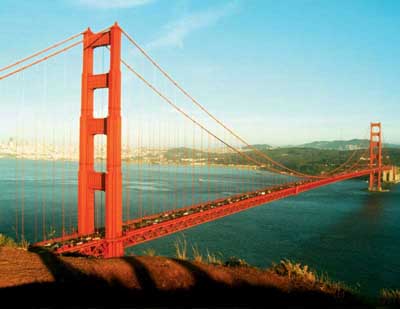 The Golden Gate's vibrant color and 4,200-foot span make it one of the most distinctive bridges on the planet.

The Golden Gate Bridge does for the West Coast what the Statue of Liberty and the Manhattan skyline do for the East: It welcomes newcomers while proclaiming the golden, youthful promise of the New World. The Golden Gate Bridge also introduces visitors to the sumptuous San Francisco Bay Area. According to former Mayor Gavin Newsom, "San Franciscans know we live in the most beautiful city in the world, a jewel on the edge of the Golden Gate."

The bridge opened in 1937 with a celebration in which 200,000 jubilant pedestrians crossed it. During the 50th-anniversary celebration, 300,000 pedestrians walked across, which is one terrific way to visit the bridge if you're in shape. The Golden Gate Bridge, which is painted orange vermilion (more commonly called "international orange"), is golden in every other respect. The bridge was named not for its color but because it spans the Golden Gate Strait, named by explorer John C. Fremont.

The Golden Gate Bridge saved San Francisco from its isolation on a peninsula. The bridge --which, at 4,200 feet from tower to tower, reigned as the world's longest suspension bridge for 27 years -- heralded an era in which suspension bridges defined modernism. So striking and beautiful is its sculptural design, the bridge forged the way to a generation of graceful, buoyant Art Deco architecture in the midst of the Great Depression. The beautiful bridge is also the centerpiece of the Golden Gate National Recreation Area (though the bridge and recreation area are managed by different agencies).

In 1919, architect Irving Morrow wrote, the strait "is loveliest at the cool end of the day when, for a few breathless moments, faint afterglows transfigure the gray line of hills." Years later, Morrow was responsible for the bridge's stylized Art Deco embellishments as well as its famous color. Some opponents argued that only steel gray or carbon black paint could protect the bridge; the U.S. Navy wanted it painted yellow with black stripes. Morrow insisted paint could be invented to protect and burnish the bridge's graceful, sinewy architecture and increase its visibility in fog while blending with its natural surroundings. He was right: The bridge didn't require an overall repainting for 27 years.

Golden Gate is the most popular destination in the national parks system, with more than 14 million visitors each year. The 74,000-acre expanse includes favorite destinations such as China Beach, Muir Beach, Fort Mason, and Alcatraz Island. It also includes the Presidio of San Francisco, which was established by the Spanish in 1776 and has become the oldest continuously operating U.S. military base.

The park provides panoramas of the Golden Gate Bridge that have been made famous over the years, mainly by Hollywood. The memorable scene in Hitchcock's Vertigo, which emphasized the bridge's overwhelming scale and sweep, was filmed under it, on the San Francisco side near Fort Point. It's definitely a view to see firsthand. From across the bay, check out the bridge's magnificence from Fort Baker, located in Marin County. You can find another picture-perfect vantage point across the bridge on its northern side at Marin Headlands, best reached by bus or car. The views from high on the San Francisco side are breathtaking as well, and don't forget the bracing scene from Alcatraz Island!

Continue on to the next page for details on festive Chinatown and the Chinese New Year.