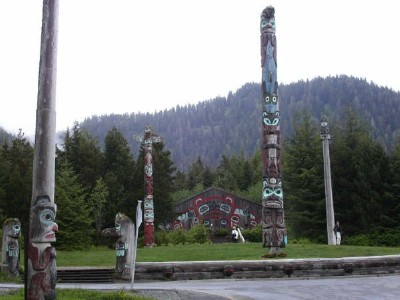 ©2005 Robert Matheson. This totem is one of more than 20 ornately carved and painted poles on display atSaxman Native Totem Park.

This is the world's largest totem park, consisting of two-dozen ornate totem poles in Saxman, near Ketchikan in southeast Alaska. Most of the poles are not dated and were reclaimed from abandoned Tlingit villages in the 1930s by the Civilian Conservation Corps and the United States Forest Service. The poles were relocated to Saxman from villages on Cape Fox and Tongass, Cat, and Pennock islands.

Each totem pole at Saxman Native Totem Park is unique. The colorful carvings share the stories of their makers and the stories of the villages where they once stood. Among the fascinating totems in the park are the "Sea-Bear Pole," which has a bear-figure base capped by the long fin of a killer whale; a memorial pole to a man who died fishing for octopus, which has an eagle at its top and a rock oyster at its bottom; and a totem that relates to the Tlingit legend, "The Princess and the Frog Clan People." Master carvers create new poles for museums, corporations, and private collectors on-site using traditional techniques.

Continue to the next page for details on family vacations to World Ice Art Championships and Kid's Park.