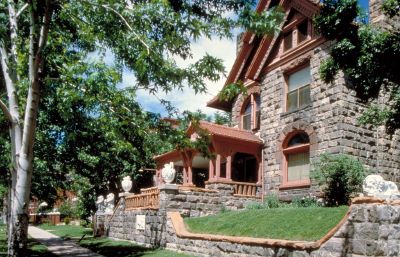 ©2006 Denver CVB Learn more about the unsinkable Molly Brown at her historic home on Pennsylvania Street.

In 1890, William M. Thayer, author of Marvels of the New West, wrote, "the most marvelous growth of modern times is the city of Denver, Colorado..." It was during Colorado's gold and silver boom that overnight millionaires began demanding opulence and elegance, and their newfound wealth quickly led to multistory masonry mansions lining the dusty neighborhood streets. From there, Queen-Anne-style homes ensued, as did aristocratic stone mansions and castle-like fortresses jutting with turrets and towers.

When the silver crash of 1893 took Denver into the deep holes of despair, downtown buildings were demolished, fortunes were lost, and the city's urban core lay in a crumble of debris. Devastated city leaders rallied together, and their perseverance led to Denver's historic preservation movement, which still continues today, particularly in Lower Downtown Denver (LoDo), where old brick warehouse buildings have been lovingly and meticulously restored.

The city now boasts more than 300 designated historic landmarks and dozens of historical districts, including LoDo, Capitol Hill, and Country Club, which flaunts some of the most spectacularly grand estates in the city. As you're wandering the streets of Denver, look for the plaques designating historical significance.

Insider's Guide: The Best of Architecture & Landmarks in Denver

Built in 1889 of Colorado rhyolite and sandstone trim, the recently restored Molly Brown House (1340 Pennsylvania St), named for the flamboyant woman whose heroism in the sinking of the Titanic made world headlines, displays early 20th century-style furnishings, along with temporary exhibits and the Brown family's personal possessions.

Stroll through Larimer Square (1400 block of Larimer St), the site of Denver's original community and commerce. Initially home to brothels, saloons, and unseemly hotels, the area was demolished and deemed "Skid Row" before historic preservationists intervened, tearing down the unsightly buildings and renovating all 16 of them into beautiful Victorian replicas.

Who doesn't want to shop -- or, at least, windowshop -- when visiting a new city? Check out the next section for tips on where to find the best shopping in Denver.