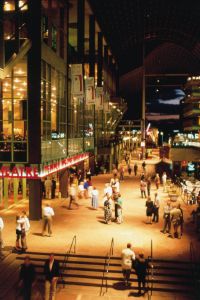 ©2006 Denver CVB The amazing Denver Performing Arts Complex can seat 10,000 for all types of performances, from ballet to opera.

Recently, Denver has experienced a soaring renaissance in the world of art and culture. With the additions of the new Ellie Caulkins Opera House, Denver Art Museum expansion wing, and the 2007 opening of the Denver Museum of Contemporary Art, the city is literally exploding with a world-class cultural climate. Add to that the prolific art displayed at the Cherry Creek Arts Festival, and it's no wonder that the city is receiving accolades from near and far.

Of course, Denver's intrinsic fabric is founded on its Wild West heritage, so if you find yourself there in January, dust off your cowboy boots, don your cowboy hat, and belt those Wrangler jeans, because the National Western Stock Show comes to town, and it's an unforgettable snapshot into Denver's fabled past.

Insider's Guide: The Best of Arts & Culture in Denver

Denverites pride themselves on the fact that their city has been named the most educated city in America, boasting the greatest percentage of college graduates of any major metropolitan area in the United States. Perhaps that, in part, explains why there's such an outpouring of support for the arts.

The city swells with museums, but the best of the bunch is the Denver Art Museum (100 W. 14th Ave), fresh off the heels of a $92 million makeover, courtesy of world-renowned master designer Daniel Libeskind.

The museum's new Frederick C. Hamilton wing, clad in titanium and jutting skyward with geometric peaks and angles, showcases 40,000 square feet of dramatically bold gallery space for its permanent collections and traveling exhibitions. For sweeping views of the Rocky Mountains, head upstairs to the sculpture deck.

Proponents of the performing arts get their fill of pop and classical music, ballet, opera, and Broadway plays at the Denver Performing Arts Complex (14th and Curtis Sts), the second largest in the nation with 10 theatres seating 10,000 people. The Ellie Caulkins Opera House, completed in 2005, touts superb amenities like seat-back translation title screens, plenty of leg room, and the Chambers Grant Salon, a bar, restaurant, and live jazz venue flanked by original works from Colorado artist Vance Kirkland.

Also worth exploring is the Denver Museum of Nature & Science (2001 Colorado Blvd), which recently added a space museum and the world's most advanced digital planetarium to its existing repertoire of fossils, Egyptian mummies, dinosaur "enviroramas," and special exhibitions. The museum's IMAX Theater, located in the recently renovated Charles Gates Planetarium, presents surround-sound nature, science, travel, and adventure films on a 41/2-story-tall screen.

Sneak in a visit to the Buffalo Museum and Grave (987-1/2 Lookout Mountain Rd) honoring William "Buffalo Bill" Fredrick Cody, the famous frontier Scout who's buried atop Lookout Mountain. Indulge in a Mid-East feast at Ali Baba Grill (109 Rubey Dr) before heading to a summer concert under the stars at Red Rocks Amphitheater (Interstate 70, Exit 259 South), arguably one of the most scenic and pristinely beautiful iconic cultural treasures in Colorado. Even if you can't catch a concert, it's worth stopping into the visitor's center just to ogle at the displays of the big name bands (U2, The Beatles, the Grateful Dead, Wilco, Sting) that have graced the magical stage.

Feeling cultured? Don't stop here. On the next page, learn about the interesting architecture and landmarks scattered throughout this great city.