Getting In, Getting Around Denver 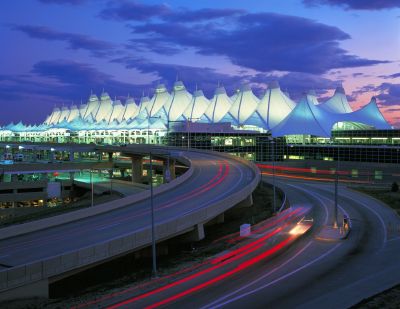 ©2006 Denver CVB Denverites joke that the airport is so far away it might as well be in another state. In truth, the trip to the airport is 24 miles from the city center.

Before you can begin sightseeing in Denver, you need to figure out how to get around. Here's a primer:

Car rental: Most of the major rental car companies -- Advantage, Enterprise, Hertz, and Avis -- are a short shuttle scoot away from Denver International Airport. Rental car counters are located in the Jeppesen Terminal, on the fifth level, and all the companies provide courtesy shuttle service to their facilities. Once you've collected your luggage, step outside the baggage claim exit doors, and you'll see the shuttles with their respective company name slowly circling the airport terminal. All of the rental car companies provide maps to get you on your way to Denver.

Public transportation: Numerous shuttle providers and limousines lie in wait to shuffle passengers between Denver International Airport and various points in and around the city -- including several hotels. Prices are generally around $20 per person for shuttle service and $65 and more for limousine service.

Regional Transportation District, or RTD's, skyRide is the direct public transit bus from the airport to downtown Denver's Market Street Station, located at the west end of the 16th Street Mall. All buses leave the airport from Level 5, Island 5, outside Door 506 on the west side of the terminal and Door 511 on the east side of the terminal. Fares range from $6 to $10 one-way, and exact change is required. You may purchase a skyRide roundtrip ticket or pass in advance. Several hotels near the airport also provide door-to-door shuttle service from the airport terminal to their property.

Rush hour: There's an ongoing joke among Denverites that Denver International Airport is so far away from the city center that it may as well reside in another state altogether. That's not quite the case, but if you're a first-time visitor, the 24-mile ride from the airport to downtown can seem like an eternity. Still, the highways are easy to navigate, signage is straightforward, and a map is helpful. The major highways, however, are congested with construction, making rush hour ripe for frustration, so allow yourself extra time if you're driving between 7 am to 9 am and 4:30 pm to 6 pm.

Rules of the road: Seatbelts are required in the state of Colorado, and you can be ticketed for not buckling up. Child restrains are mandatory for all children younger than 6 years old, and children less than 1 year old must be strapped in a rear-facing child restraint seat.

Highway speeds vary throughout Colorado, but for the most part, the highway speed limit in and around Denver is 55 mph. As you head out of town, the limit increases to 65 mph. Here's an insider tip: the police rigorously patrol the highway in and out of the airport, so resist the urge to put the pedal to the metal.

Public transportation: Denver is still playing catch-up when it comes to contemporary methods of public transportation, but the Regional Transportation District or RTD operates numerous bus routes and a limited light rail system. Service within Denver and to the outlying suburbs and communities is prompt and plentiful, and there are 65 Park-n-Ride locations throughout the Denver-Boulder area for stowing your car.

One-way bus tickets are $1.50; seniors, Medicare recipients, and disabled patrons pay 75 cents, and children age 5 and younger travel free. Regional and Express fares vary, and light rail tickets range from $1.50 to $2.75, depending upon the zone. Exact change is required on busses, and light rail tickets can be purchased at station vending machines. FasTracks, a 12-year comprehensive plan to build and operate high-speed rail lines, expand and improve bus service, and increase the number of Park-n-Rides throughout the region, is progressing; but for now, it's the bus or bust.

Taxis, on foot, or by bike: Somewhat surprisingly, Denver is not a town overwhelmed with taxis. They are available, but don't expect to find a litter of yellow cabs lined up at hotels or perched on every street corner. Should you need a taxi, it's best to phone ahead. If you're slumbering at a downtown hotel, then you'll want to explore the city center on foot.

Denver boasts an extremely walkable downtown, coupled with free shuttles that transport visitors from the far west end of the 16th Street Mall to the east end, which sits just steps away from Civic Center Park and the Colorado State Capitol.

As for biking, it's the hip way to travel, and bikes are nearly as common in Denver as cars. If, however, you plan to sightsee or conduct business outside of the downtown area, a car is highly recommended.

Now that you know how to get around Denver, we'll tell you what to do, starting on the next page with special events and attractions.