The Future of Deep-sea Rescue 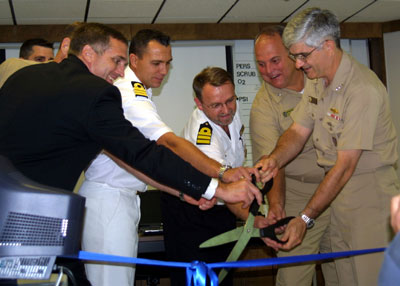 Continuing efforts are being made to keep the international submarine community one step ahead of the curve in deep-sea rescue efforts. One key element to this was the opening of the International Submarine Escape and Rescue Liaison Office (ISMERLO) in June 2005. The ISMERLO team, whose office is located in Norfolk, Va., is made up of deep-sea escape and rescue experts from around the world. The goal of ISMERLO is basically to be a 9-1-1 station for all submarine rescue attempts, acting as a go-between for the different submarine communities around the globe. It also endorses procedures and helps to establish international standards for response and rescue. ISMERLO was first used in the training exercises at the 2005 Sorbet Royal, and this experience was crucial to their success of the Priz rescue effort.

In addition to sponsoring the Sorbet Royal, NATO has also begun work on a project called the NATO Submarine Rescue System (NSRS), a European rescue system involving the help of France, Norway and the United Kingdom. The goal of the NSRS is to develop faster response times and the ability to extract and treat more crew members at once.

The actual rescue system is made up of the following elements:

To maximize each rescue effort, the NSRS rescue unit is capable of holding up to 72 crew members at one time, more than double the amount of the United States' DSRV. The equipment is strong enough to withstand the pressures of the deep but light enough to be transported by plane to anywhere in the world within a 72-hour time frame. The three-man crew can take the unit as deep as 2,000 feet with full operational capabilities. It's currently housed at a naval base in Scotland, near several military and civilian airports.

For more information on military and civilian rescue, please move ahead to the links on the following page.

Deep-sea exploration doesn't always involve rescue. From the wreckage of the Titanic to the search for sunken treasure, there's a great deal of civilian interest in what lies beneath the surface. In 1999, Discovery Channel sponsored a deep-sea recovery effort to raise the Liberty Bell 7 space capsule from the ocean's floor.

Gus Grissom was the second man ever launched into space, taking a suborbital flight in the bell-shaped capsule in 1961. The splashdown on his return nearly killed him, but he was able to find rescue from naval helicopters while his spacecraft sunk 15,000 feet to the bottom of the ocean. Fast-forward 38 years later, when Discovery Channel's civilian underwater salvage team was able to bring the capsule to the surface and send it to its home, on display in the Cosmosphere Museum in Kansas [source: CNN].