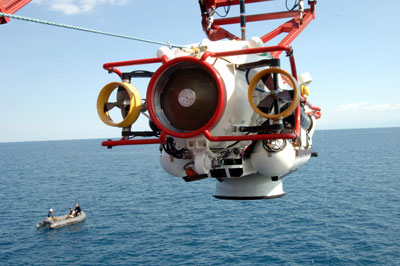 Sorbet Royal may sound like a French dessert, but it's actually the most intensive deep-sea rescue training exercise in the world. The NATO-sponsored event is held every three years, alternating between locations in the Baltic and Mediterranean Seas. Sorbet Royal 2005 floated its way into Taranto, Italy, for 11 days of multinational rescue exercises with participants from 24 nations, including, for the first time, divers and submariners from the Ukraine and Russia. The goal of each Sorbet Royal is to top the previous one in the intensity and scope of the exercises.

Italy, the Netherlands, Spain and Turkey supplied the subs to be used for the exercises -- each one taking turns being sunk several hundred feet to the bottom of the ocean with crew members aboard. The complexity of the rescue scenarios was intensified at the 2005 Sorbet by staging rescues of multiple vessels instead of one at a time. The different countries responded together, sharing techniques and learning the compatibility of the equipment they use. Submarines travel great distances from their home bases, and the ability of other countries to respond to a distress call is crucial to the successful rescue of the crew. The submarine community is tight-knit and crosses international boundaries.

The 2005 Sorbet was an important one. There have only been 170 deep-sea accidents in the 120-year history of the submarine, but eight have been in the last 10 years. This includes the 2005 loss of the Russian nuclear sub, Kursk. In that accident, the sub was disabled 350 feet down, with 118 crew members aboard [source: Guardian]. The British Navy responded to the alert but was unable to save anyone. The loss of the Kursk was a strong motivator for the Russians to participate in the 2005 exercise.

On the first day of exercises the multinational teams got their feet wet by performing the following drills:

The United Kingdom's submarine rescue vehicle LR-5 is lowered into the water by a crane from the Finnish ship Fennica during Sorbet Royal 2005.
Photo courtesy U.S. Navy

The teams tested the latest equipment, some of it for the first time. Atmospheric diving suits and hyperbaric stretchers both played key roles in the training. The final exercise of the event was a 36-hour rescue of 80 simulated casualties at a depth of 236 feet. The teams used techniques from each of the previous exercises in the well organized rescue effort. Medical specialists on the surface acted out the techniques for treating the casualties for a variety of illnesses and injuries.

This is where deep-sea rescue is today. In the next section, we'll take a look at where it's headed.