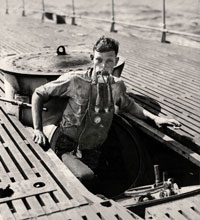 In 1939, the U.S. Navy submarine Squalus sank during a test dive in 250 feet of water off the coast of New England. At the time, the Squalus was the most advanced sub in the Navy's fleet. There was a general feeling in those days that a submarine sinking meant that the crew would perish -- there were no established rescue methods or rescue equipment. Navy submarine expert Charles "Swede" Momsen had the brilliant idea to use a diving bell to carry rescue sailors down to the sub.

A diving bell has a heavy platform attached to a bell-shaped cover. The bell is stabilized so it doesn't tilt, creating an airtight pocket of oxygen. Once the bell reached the sub, rescuers attached cables to the sub so they could tow it to the surface. Over the course of 39 hours and four trips, Momsen and his team were able to save the lives of all 33 crew members. For his efforts, he was awarded a commendation from President Franklin D. Roosevelt. Momsen also invented the "Momsen Lung," a rubber breathing bag worn around the neck that recycles exhaled air. Soda lime in the bag removes carbon dioxide and replaces it with breathable oxygen. The bag also allowed a slow and safe ascent to the surface.

Following the sinking of two U.S. nuclear submarines, the Thresher and the Scorpion, in 1963 and 1968, the Navy decided it was time to ramp up its research into deep-sea rescue efforts. All personnel aboard these two subs perished, and the incidents rocked the Navy. In 1964, the Navy's Ocean Engineering Program started the Deep Submergence Systems Project (DSSP) to develop deep-sea rescue vehicles (DSRV) that could descend and attach to sunken submarines to deliver the sailors to safety.

One of the objectives of the DSSP was to deploy and reach any submarine disaster area within 24 hours of notification. The Navy partnered with the Lockheed Corporation to help develop these rescue vehicles. The tricky part in the construction phase was making them sturdy enough to withstand deep-sea water pressure, while being light enough for transport by airplanes, ships or trucks. The first two DSRVs were in the water by 1970 for testing. After successful rescue exercises were completed, the DSRVs were delivered to the Navy and put into service in 1971. The Navy dubbed the two rescue vehicles Mystic and Avalon.

The DSRV-1 Mystic being checked off the coast of southern California.
Photo courtesy U.S. Navy

The Mystic and Avalon are nearly 50 feet long and weigh close to 50 tons each. They have a maximum depth capability of 5,000 feet and are equipped with Doppler radar and three types of sonar. Six different video cameras and one 35-mm still camera send visual information to the surface. The DSRVs require a four-man crew, two pilots and two rescue personnel, and can carry a maximum of 24 passengers [source: U.S. Navy]. The Avalon has an inactive status now because of its age, but the Mystic remains at the ready for deployment anywhere in the world.

In the next section, we'll explore some of the equipment used in deep-sea rescue efforts.

In August 2005, the Russian submarine Priz became snared in underwater cables on the bottom of the ocean off the coast of Siberia. The sub was trapped, and the seven Russian sailors aboard the Priz faced certain death with their oxygen supplies running out and ­temperatures reaching lows of 43 degrees Fahrenheit (6 degrees Celsius). After a failed rescue attempt by a Russian Navy team, a distress call was sent out and the British Royal Navy was the first to respond.

Initially, it was thought that the minisub was caught in fishing nets. It was later found that the web of cable was part of an underwater surveillance antennae anchored to the sea floor. Using the unmanned Scorpio rescue sub, the cables were cut loose, freeing the sub after 72 hours on the ocean's floor. Military doctors were on hand to treat the men, all of which were in fairly good shape considering the peril they faced [source: BBC].