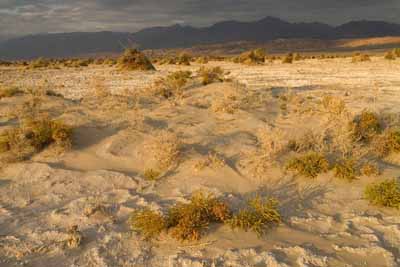 ©2006 National Park Services
Hundreds of arrowweed plants stand atop a pedestal of roots in an area known as Devil's Cornfield. See more pictures of national parks.

Visiting Death Valley National Park
Death Valley National Park is a place of radical geography: It owns the distinction of having the lowest elevation in the Western Hemisphere (282 feet below sea level near Badwater) and protects Telescope Peak, which has an elevation of 11,049 feet. At the higher elevations, desert fir, spruce, and quaking aspen are found in abundance in stark contrast to the plantless desert floor of the valley.

Death Valley's landscape encompasses numerous ecosystems and destinations of interest, including salt and alkaline flats that stretch for miles, broad regions of sand dunes, winding ancient canyons, multicolored rock cliffs and ridges, and historical sites. Although the average annual rainfall is less than two inches, Pacific storms occasionally roar in and cause flash floods that wash out roads, trails, and campgrounds. On most days of the year, however, Death Valley is a sunny paradise where one can experience great solitude and tranquility. In the wintertime, it is a haven for "snowbirds," who park their recreational vehicles and stay for weeks, sometimes months.

Because of its unique climate and geography, Death Valley is a realm unlike any other, except perhaps the Dead Sea region of Israel (which is even farther below sea level). Death Valley is a place where life has been largely stripped away, and the original surface of the earth can be seen, naked and bare, in its pure and elementary shapes. Line, form, and color reign here -- not humans, beasts, or nature.

Perhaps because it feels so prehistoric, the desert landscape of Death Valley fascinates visitors. But there is much to see beyond the natural landscapes: Ghost towns of old silver and borax mining communities illustrate the richness of the valley's earth. On the next page, you'll find a guide to the sights of Death Valley.

Few places are as foreboding -- or as beautiful -- as Death Valley National Park. Sprawling across 3.3 million acres of the Mojave Desert, the park is almost completely surrounded by mountains.

To the east, the bare walls of the Amargosa Range rise steeply from the desert floor, forming the sawtooth peaks of the Grapevine, Funeral, and Black mountains. The range is creased by dozens of deeply eroded canyons, exposing layers of pastel-colored sediments deposited millions of years ago by a series of ancient seas.

To the west, the Panamint Range rises to some 11,000 feet and is peppered with the ruins of mining camps where prospectors once searched for gold, silver, and later, borax. The mountains and canyons are still cross-hatched by old mining roads, many of them now used as hiking or four-wheel-drive trails.

This is a harsh and unforgiving land. Less than two inches of rain fall annually, much of it in brief showers that may last only a few minutes. Summer temperatures routinely soar above 120 degrees, while winter temperatures commonly dip below freezing. Expecting a heat-scorched desert, first-time visitors are often surprised to see a dusting of snow atop the highest peaks as late as March or April, when the weather on the valley floor is already quite balmy.

Between the mountains is the valley itself, about 140 miles long and as much as 16 miles across. Here, sand dunes are sculpted into ever-changing shapes by the ceaseless action of the wind; salt flats shimmer in the heat; and knobby crystal formations (such as those at the Devil's Golf Course) sparkle in the sunshine.

Despite its treacherous terrain, Death Valley has been occupied by various settlers -- mostly as a result of the successive discoveries of silver, gold, lead, copper, and borax on the lands. On the next page, learn about the remaining ghost towns in the valley and about the remnants of an unfinished castle at the foot of the Grapevine Mountains.

The History of Death Valley

Death Valley's name came from a party of travelers who, in 1849, made a disastrous short-cut across the region to the California gold fields. Before departing, the survivors cursed the valley and gave it a name, saying: "We took off our hats, and then, overlooking the scene of so much trial, suffering, and death, spoke the thought uppermost in our minds, saying, 'Good-bye, Death Valley.'"

Two decades later, a band of outlaws hiding out in the Panamint Mountains unexpectedly discovered silver in Surprise Canyon. By 1874, Panamint City was a booming mining town with a population of 2,000. Two years later, a flash flood wiped out most of the town. There are similar stories for many of the ghost towns that are scattered throughout the valley: Ballorat, Chloride City, Leadfield, Harrisburg, Greenwater, and Skidoo.

The largest of the mining communities in Death Valley was Rhyolite, whose heyday spanned seven years in the early 1900s. The ruins of Rhyolite are fascinating to visit today. The train depot, jail and bank buildings stand empty in the forbidding Mojave Desert, a testament to the inhospitability of Death Valley.

Scotty's Castle
Death Valley may seem an unlikely place for a castle, but it has one: Scotty's Castle, a $2 million, 25-room fairytale palace nestled at the foot of the Grapevine Mountains. The castle was built by a rich Chicago businessman named Albert Johnson. Johnson was an investor in a gold mine set up by Walter Scott, a former prospector, mule wrangler, cowboy, and performer in Buffalo Bill's Wild West Show. Although Scott -- or Death Valley Scotty -- had a number of excuses to explain it, the mine somehow never brought any return.

Johnson traveled to Death Valley to visit the mine, and he and Scotty struck up an improbable friendship. He never actually saw any mine, but the desert weather did wonders for Johnson's health, so he returned often. On the advice of his wife, Johnson built a retreat in an isolated canyon as a place to stay. Construction began in 1925 and continued for some six years until Johnson, rocked by the Great Depression, ran short of funds.

Scotty spent the rest of his long life in the mansion. He died in 1954 at the age of 82 and is buried with his dog on a nearby hillside. The Park Service offers daily tours of the castle. Although never quite finished, it is lavishly appointed with paintings, antiques, chandeliers, and a variety of imported furnishings.

It seems strange that this piece of refinement sits on the rugged land of Death Valley. But as visitors have been discovering for years, Death Valley National Park holds many surprises.