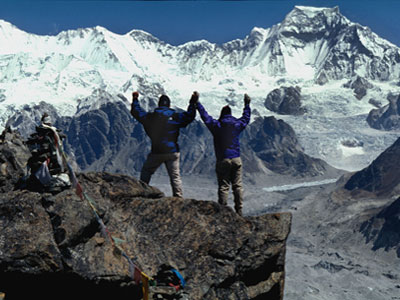 Mount­ Everest is the h­ighest point on planet Earth. Because of this unique distinction, humans have been climbing it since Sir Edmund Hillary's first successful ascent in 1953. The peak of Everest is located in Nepal and stands tall at 29,035 feet (8,850 meters) above sea level [source: mnteverest.net]. The mountain itself shares a border with both Nepal and Tibet. Because of the severe weather at the summit, climbers rarely attempt to complete the trek outside of the May to June window, when the jet stream is pushed north. Even then, the weather is pretty inhospitable. An average day in May 2008 saw a high temperature of minus 17 degrees Fahrenheit (minus 27 degrees Celsius) and winds of 51 miles (81 km) per hour [source: USA Today].

­At other times during the year, the jet stream passes directly by the summit and winds can blow at hurricane strength -- 118 miles (189 km) per ho­ur -- and temperatures can dive as low as minus 100 degrees Fahrenheit (minus 73 Celsius) [source: teameverest03.org]. Add to this the fact that there's less than one-third the amount of oxygen in the air compared to sea level, and you can see why Everest adventurers have their work cut out for them.

Still, this doesn't stop the adventurous spirit. The downside to having that spirit is that it could lead to your death. Everest News estimates that, as of 2004, more than 2,000 people had successfully reached the summit, while 189 died trying. If you're one of the roughly 150 people to attempt to scale Mount Everest in this year, there's something you'll be sure to see along the way -- dead bodies.