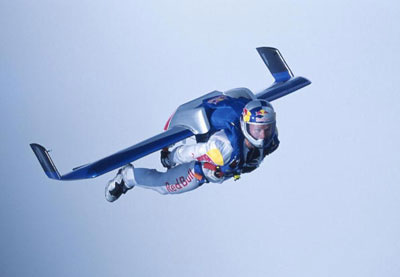 Today's daredevils are a far cry from the turn-of-the-century pioneers. Some are extreme athletes that push the limits of the human endurance; others are average people who treat their bodies like punching bags.

If you've paid attention to the news, you've probably heard of the real "Spiderman." Frenchman Alain Roberts is the man behind this famous nickname. He's earned fame as an urban free-climber, scaling skyscrapers with his bare hands and no safety measures in place. He climbed his first building in Chicago in 1994 and soon realized he could earn a living by doing so. To date, Roberts has scaled more than 70 skyscrapers, often raising large sums of money for charity from sponsors and advertisers. In the early days, "Spiderman" would get arrested for his unauthorized ascents, but as his star rose, companies began seeking him out to climb their tall buildings.

Felix Baumgartner, an Austrian daredevil skydiver and BASE jumper currently holds quite a few world records. He broke his own record for tallest BASE jump by leaping from a height of 1,670 feet at the 101 Tower in Taipei, Taiwan. He also owns the lowest BASE jump record for his 95-foot fall from the outstretched right hand of the Christ Statue in Rio de Janeiro, Brazil. One of the coolest feats Baumgartner has achieved was his skydive across the English Channel. Using a pair of 6-foot carbon-fiber wings, he leapt from a plane at 30,000 feet and then flew at speeds up to 220 miles per hour to travel 22 miles across the channel in just over 14 minutes. Baumgartner trained for the stunt for three years -- going so far as to strap himself to the top of a speeding car.

"Jackass" -- the name says it all. The runaway hit TV show from MTV, which later spawned a hit movie and sequel, features regular guys abusing their bodies for laughs. The TV show only ran for two seasons, but has since launched the legitimate acting career of star Johnny Knoxville as well as five different spin-off shows. A typical episode of "Jackass" might have included Knoxville being shot while wearing a bulletproof vest or co-star Steve-O taking hits from a stun gun -- all filmed with inexpensive video cameras. The show was an instant hit, and the jackasses soon became household names. Although "Jackass" had disclaimers at the beginning of each show, stories of copycat stunts started to pop up all over the country. Kids were endangering themselves by trying to duplicate some of the reckless stunts. Senator Joseph Lieberman became a thorn in the side of the production and ultimately forced the cancellation of the show through increasing pressure on MTV and its advertisers.

For more information on all things daring, please look into the links below.