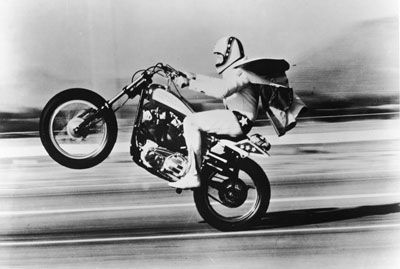 Born in 1938 in Butte, Mont., to Ann and Chase Knievel, Robert Craig "Evel" Knievel was perhaps the greatest daredevil in history. Even though his stunts weren't always successful, he was a master performer and marketing genius, turning his motorcycle jumps into a cottage industry.

As a teen, young Bobby always seemed to find himself in trouble. In fact, his troublesome ways are what led to his famous moniker. After getting arrested for recklessly driving his motorcycle, he was sitting in a jail cell across from one William "Awful" Knofel. The name stuck with Bobby and he decided that "Evil" Knievel would be his stage name. He changed the "I" in Evil to an "E" simply because he thought it looked better [source: The New York Times]. A superior athlete, Knievel also served in the U.S. Army.

After holding various jobs ranging from insurance salesman to big-game hunting guide, Knievel opened a Honda motorcycle dealership in Washington state, but failed to generate enough income to support his family. Recalling a car stunt show he'd seen as a child, he decided to stage his own motorcycle stunt show. Acting as his own press agent, ticket salesman, promoter and emcee, his first professional jump was 20 feet over boxes of rattlesnakes and two mountain lions. He came up short and landed on the rattlesnakes to the delight of the audience. Believing he was on to something, he convinced a Norton motorcycle distributor to sponsor his show, and a legend was born.

Staging shows mainly in southern California, Evel Knievel soon developed a following that came in droves to see him attempt to jump everything from parked cars to live animals. The jump that really catapulted him to national fame was over the fountain at Caesar's Palace, Las Vegas. At a distance of 151 feet, it was the longest jump he'd ever attempted. More than 15,000 watched live, with several million at home in front of their TV sets. What happened at Caesar's both thrilled and horrified the viewing audience. Knievel cleared the fountains, but landed badly and tumbled over the handlebars. He continued to tumble like a stuffed dummy, finally coming to rest in the adjacent Dunes parking lot. He suffered multiple injuries and spent 29 days in the hospital.

His most famous debacle came when he attempted to jump Snake River Canyon in Idaho strapped into a jet-powered rocket cycle. After a successful take-off, his X-2 Skycycle had just cleared the canyon when the parachute prematurely deployed. This carried the rocket back into the canyon where it floated to the ground, not far from the river. He escaped this feat with a couple of minor injuries and some egg on his face.

Known as much for his spectacular crashes as his successful jumps, Knievel was a skilled promoter and found great success through his line of Evel Knievel toys, television specials and merchandising. He holds the record for the most broken bones and had so many metal plates in his body that he even began breaking those. Knievel made his final jump at Miami-Hollywood Speedway in 1981. His son Robbie has since gone on to break all of his father's motorcycle jump records.

Sadly, Evel passed away in 2007 from complications from diabetes and an incurable lung condition. His legend has inspired pop songs, movies, documentaries, a rock-opera and an exhibit in the Smithsonian Institution.

In the next section, we'll take a look at the current crop of modern daredevils.