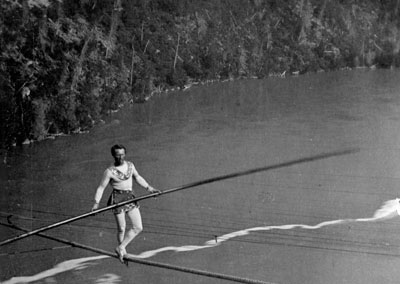 Perhaps no other place on Earth has seen more daredevil acts than the falls at Niagara -- so much so that the falls' tourist center has an exhibit dedicated to the history of the daredevil stunts performed there. The Horseshoe Falls on the Canadian side is the preferred location due to its lack of rocks below. At a height of 170 feet, daredevils truly risk their lives when they take the plunge.

Long before anyone went over the falls in a barrel, daredevils performed tightrope acts high above the churning waters below. One of the most noteworthy of these early daredevils was "The Great Blondin." Blondin, aka Jean Francois Gravelot, made his first journey across the Niagara River in 1859 -- along a 1,100-foot tightrope that connected the United States and Canada. It took about 20 minutes and a 40-pound balancing pole that spanned 30 feet. Blondin completed eight more walks, adding everything from a wheelbarrow to his manager on his back. Blondin would usually just "pass the hat" to collect money for his derring-do.

The Great Blondin's chief daredevil rival was "The Great Farini," or William Leonard Hunt. Hunt was actually among the crowd that watched Blondin complete his first tightrope walk across the river. Seeing this feat inspired him enough to quit his job and pursue his own daredevil dreams. While Blondin was lacking in the business department, Farini was a smart young performer who mass-marketed his events and demanded top dollar to perform. Blondin was the more polished performer, but Farini was far stronger, enabling him to add a unique twist to his first attempt across the falls. In 1860, The Great Farini set off across the falls with a second rope strapped to his back. At the midpoint of the journey, Farini used the second rope to lower himself 200 feet to the deck of the Maid of the Mist tour boat. After a quick glass of wine, he then climbed back up and resumed his walk with baskets on his feet. Blondin and Farini engaged in a back-and-forth display of one-upmanship, each trying to top the other's stunts. When Blondin did a headstand, Farini did a handstand. When Blondin carried a stove out onto the wire and cooked an omelet, Farini lugged out a washtub and scrubbed handkerchiefs.

In 1901, a 63-year-old retired school teacher named Annie Taylor became the first person to go over Niagara Falls in a barrel. The fame and fortune of other famous daredevils prompted the stunt. With her pet cat, pillows for padding and an anvil in the base to keep her upright, Taylor floated over the edge and lived to tell about it. It took 10 years for a man to attempt the stunt. Since then, 16 different daredevils have made the trip over the falls, 11 of which lived through it. In 2003, Kirk Jones became the first person to intentionally go over the edge with nothing but the clothes on his back. Somehow, Jones survived the plunge with only minor rib injuries. If you want to find out more about the physics behind the barrel plunge, you can read it in How Going Over Niagara Works.

In the next section, we'll rev up our engines for the most famous of all daredevils, Robert "Evel" Knievel.