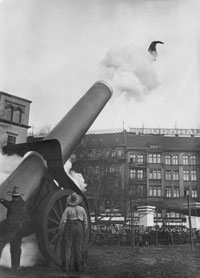 A human cannonball flies through the air after being fired from a cannon.
Hulton Collection/Getty Images

It's not clear why the first daredevils did what they did. With little publicity and no such thing as television or radio, daredevil pioneers risked their lives for small live audiences. Some might argue that they were simply adrenaline junkies, much like today's extreme sportsmen. Some of the early daredevils might be viewed as inventors and experimenters. Frenchman Jacques Garnerin experimented with the world's first parachute jump with a non-rigid frame in 1797. He graduated from jumping from trees and sending animals out as test jumpers to eventually jumping himself from a hot air balloon at 3,200 feet. His experimentation with the non-rigid frame led to skydiving as we know it today.

Barnstormers, daredevil pilots who performed aerial stunt shows, flew into the scene after World War I. At the time, these shows were the most sought-out form of entertainment. Mostly fighter pilots, these early risk takers took their biplanes on death-defying rolls and tumbles in the unregulated skies -- all in the name of showmanship. Aviation legend and national hero Charles Lindbergh learned his flying skills as a barnstormer and even performed parachute and wing walking stunts.

Wing walkers climbed from the plane's cockpit to do handstands and hang from trapezes. Early wing walker and Army pilot Ormer Locklear first climbed from his cockpit to fix a broken radiator in mid-air. His commanding officers found that Ormer's stunts boosted morale, and they surprisingly encouraged him to keep up his antics. After an honorable discharge, Locklear became a professional wing walker, to the delight of aerial show fans everywhere. He would hang from a ladder by his teeth and walk from plane to plane in midair -- sometimes earning as much as $3,000 for an appearance.

Unfortunately, like many wing walkers, Locklear was killed while performing a stunt. The U.S. government outlawed wing walking below 1,500 feet in 1936, basically rendering the practice obsolete -- no one could see anything from the ground at that distance.

Human cannonballs are certainly among the early daredevils. The first human to be used as a projectile was "Lulu" in 1871. This British man dressed in drag and was sent skyward by a catapult at the London Music Hall. The first actual cannon was used by circus pioneer P.T. Barnum in 1880. Another Brit, a real woman named Zazel, stunned audiences when she climbed into the cannon and was shot into a safety net. Barnum used coiled springs to propel her along with a fake bang and puff of smoke thanks to well-timed firecrackers. These days, the springs have been replaced by a compressed air cannon -- but they still use a fake bang to give the audience a thrill. Unfortunately, Zazel broke her back while performing and retired from the show.

High-wire walkers came onto the daredevil scene as a circus act, but later left the tent in search of greater heights. In tightrope walking, a balance bar is typically used to slowly walk along a taut half-inch metal cable. Daredevil Philippe Petit gained notoriety in 1974 by walking the span between New York's Twin Towers of the recently completed World Trade Center. He actually walked the wire eight times in succession, stopped to kneel and salute and even laid down on the thin cable at one point. The walk was carefully planned and completely illegal. After a lot of coaxing, officers on the scene were finally able to get Petit off the wire and into custody. As a result of the notoriety he received, the charges were dropped if he agreed to a free performance for the children of New York, to which he obliged.

In the next section, we'll climb into a barrel and go over Niagara Falls.­

­One of the fastest daredevils was Englishman Donald Campbell. He was a speed junkie, at one time simultaneously holding both world records for land and water speed. In 1967, on his final attempt to break his own water speed record, Campbell was killed when his jet-powered boat turned nose up and shot 50 feet into the air. He was traveling at more than 300 mph when he launched. When the boat landed, it disintegrated on impact, instantly killing Campbell.

Campbell's remains went undiscovered until nearly 40 years later, when the shell of the boat and his body were recovered for burial. In 2002, the man in charge of radio communications released a digital copy of Campbell's last words before the boat turned north and the stunt went south. His last words -- "The bow is up. I'm going. I'm gone" [source: BBC]. Gone indeed.