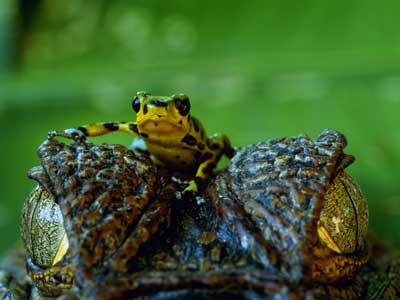 Which is your greatest enemy -- this poison dart frog or the crocodile it's perched on?
Art Wolfe/Getty Images

As­k your friends which anima­ls they fear most and you'll probably get a myriad of answers -- sharks, snakes, bears, spiders, bees. Take your pick. Sharp teeth, deadly claws, venom, and sheer size and speed make us view many creatures as a menace.

But are the animals we perceive as fearful really the most treacherous? Not always -- sometimes danger lurks in strange packages. Take, for example, the poison dart frog. Found mostly in tropical forests, this little amphibian actually oozes poison from its back. The toxin from one frog could kill 10 humans.

When you're taking a dip in the ocean, your greatest fear probably is a shark attack. But perhaps you should turn your concerns to the Australian box jellyfish, instead. This invertebrate has up to 60 tentacles, each up to 15 feet (4.5 meters) long. Each tentacle has enough toxins in it to kill 60 humans.

And, the hefty hippopotamus, which eats mostly plants, looks cute and cuddly. But don't let that fool you. This giant animal is quite aggressive and is widely considered one of the most dangerous animals in Africa [source: Kruger National Park].

­Other frightening creatures do live up to their hype, however. For example, the saltwater crocodile, which is found in India, Asia and Australia, is the classic predator -- it'll attack just about anything, including you. And in Africa, the lion is just like they say -- incredibly fast and brawny, with flesh-tearing teeth and claws. It feeds on weaker mammals and will attack humans if its regular food sources are scarce. Also legitimately fearsome -- the polar bear, found in the Arctic. It's dangerous to humans largely because it's not naturally afraid of them, unlike most animals. And, we're certainly no match for its burly strength, razor claws and teeth. And, let's not forget the king cobra. Found in India, China and Asia, it isn't the most venomous snake in the world -- that honor goes to the inland taipan -- but the cobra's extremely concentrated venomous bite can kill even an elephant.

All of these animals kill hundreds of people annually. But one animal wins by a landslide in total human carnage -- its bite results in the deaths of a million people per year. What is it?

The Most Deadly Animals: Mosquitoes 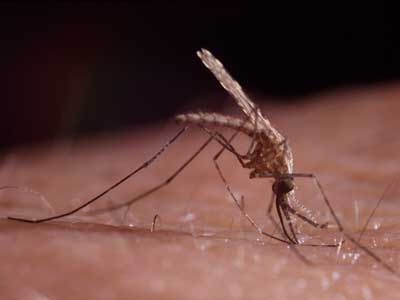 The most deadly ­animal in the world is the mosquito. It might seem impossible that something so miniscule can kill so many people, but it's true. Mosquito bites result in the deaths of more than 1 million people every year [source: WHO]. The majority of these deaths are due to malaria. The World Health Organization estimates that between 300 and 500 million cases of malaria occur each year -- and a child dies from malaria every 30 seconds [source: WHO].

It's not the mosquito itself that kills, but rather a parasite the mosquito carries. Not all mosquitoes carry the malaria parasite -- only females of the Anopheles genus. You'll find the Anopheles all over the world, with the exception of Antarctica. The mosquito transmits malaria after biting an infected person and then passes along the parasite to the next person it nibbles on. Malaria is a blood-transmitted disease, which means you can't contract it from casual contact with another person. Because it's transmitted through the blood, you can contract it from a contaminated transfusion or needle. But mosquitoes are primarily to blame for the spread of malaria infection.

­The United States no longer considers malaria a public health issue. The disease virtually disappeared in the 1950s when the National Malaria Eradication Program implemented a DDT (a synthetic pesticide) program to control the mosquito population [source: CDC]. However, this program saw limited success in the rest of the world. Nations with a temperate climate and seasonal mosquito issues were able to eradicate malaria. But in other countries, resistance to insecticides and drugs, cuts in funding and lack of participation made long-term eradication efforts impossible. The United States still reports a few hundred malaria cases per year. But most cases occur in travelers returning from a malaria-ridden country [source: CDC].

Today, the majority of malaria deaths occur in Africa, south of the Sahara, where the malaria parasite is very common. Anyone can contract malaria, but the people most likely to get seriously or fatally ill are those with little or no immunity -- young children, pregnant women or travelers who live in an area that has no malaria. People from poor communities with little access to health care and clean water sources -- standing water is a prime mosquito breeding ground -- are also at risk. Anti-malarial drugs exist, but there's currently no malaria vaccine.

Affected countries now turn to malaria control rather than eradication. The Centers for Disease Control and Prevention refers to these activities as vector control. Vector control means decreasing contact between humans and disease carriers on an area-by-area basis. The aim is to cut down on the mosquito parasite population using insecticide treated nets that drape over people's beds, indoor spraying and larval (egg) control. Insecticide treated bed nets in particular can cut mortality rates by 20 percent [source: CDC].

In addition to malaria, mosquitoes carry the West Nile virus and dengue fever. West Nile is a disease the insects pick up from infected birds. It affects the nervous system and, like malaria, can be very serious in people with lowered immune systems. The virus became prevalent for the first time in the eastern United States around 1999 [source: CDC]. As with malaria, the best way to avoid West Nile is to protect yourself from mosquitoes. Mosquitoes also carry dengue fever, which causes a rash and extreme muscle and joint pain. It can be fatal if not treated properly.

So, forget lions, tigers and bears -- turn your paranoia to the teeny mosquito buzzing near your ear. It's one scary little beast.

In North America, you might fear the grizzly, but it's white-tailed deer that kill an average of 130 Americans per year by causing auto accidents. Deer collide with cars more than 1.5 million times per year [source: Bailey]. Compare that to about 24 fatal grizzly attacks in the past decade [source: Black Bear Heaven]. Keep alert for the doe-eyed menace.

Can you really escape an alligator if you run in a zigzag?
How to Avoid Hypothermia
Dick Proenneke: 30 Years Alone in the Alaskan Wilderness