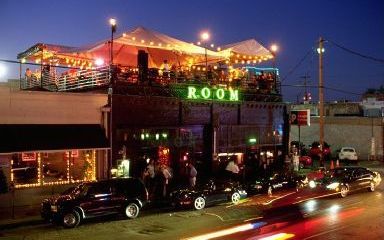 ©2006 Dallas Convention and Visitor's Bureau If blues is your bag, head to Deep Ellum for live music until 2 am.

As the iconic Lone Star anthem declares, "The stars at night are big and bright/Deep in the heart of Texas," and their celestial glow illuminates the way, as revelers roam the various districts of the Big D each evening.

When the chic boutiques and antique shops of the Knox-Henderson District close their doors for the day, the neighborhood pubs and upscale restaurants get ready for a deluge of customers. Meanwhile at Mockingbird Station, the "in" crowd indulges themselves with iced lattes and espressos as they enjoy a late-night showing of the latest foreign release or indie flick at Angelika Film Center, an eight-screen arthouse.

After an afternoon spent touring The Sixth Floor Museum and the Dallas World Aquarium, visitors watch the sun go down as they travel through the streets of the historic West End District in a horse-drawn carriage before embarking on an epicurean adventure at one of the area's upscale restaurants. In the heart of Deep Ellum, the mournful tone of a blues trumpet wails until the city shuts down at 2 am.

Insider's Guide: The Best of Nightlife & Entertainment in Dallas

Texas tunesmiths perfect their craft at Poor David's Pub (1313 South Lamar St), a haven for the music connoisseur looking to discover artists on the rise.

The preferred hangout for the football fanatic, Frankie's Sports Bar and Grill (3227 McKinney Ave) is where you can root for your favorite team in front of 26 screens or cheer on your friends as they belt out a tune every Wednesday during karaoke night.

After watching the latest arthouse offering at the Angelika Film Center, movie buffs flock to Trinity Hall Irish Pub and Restaurant (5321 E Mockingbird Lane), a family-friendly watering hole where spirited conversations are served along with the spirits on tap. The city's sole establishment to feature live music from the Emerald Isle, this cozy retreat offers a heart-felt "failte" to all who enter.

The city's most unique drink is served at the Absinthe Lounge (1409 South Lamar, Suite 008), an uber-hip hideaway where a legal, Americanized version of The Green Fairy flows freely as riffs from a jazz band drift through the venue.

For those who want to enjoy comedy without cringing, the rapid-fire farce served up by the improv performers at Comedy Sportz DFW (603 Munger Ave) offers clean chuckles for every age group as two teams vie for laughs and audience members judge their jesting.

Order Mamma's Skinny Enchiladas covered with ranchero sauce and melted cheese at Don Pablo's (10333 Technology Blvd E), a tried-and-true Mexican food chain, before enjoying the latest Tinseltown flick at The Grand 24 (10110 Technology Blvd East), a Dallas megaplex with stadium seating that at one time held the distinction of being the world's largest movie house.

Since 1981, more than 15 million country and western lovers have Texas Two-Stepped across the dance floor, sung along with their favorite band in concert, or marveled at the bravado of professional bull riders at Billy Bob's Texas (2520 Rodeo Plaza), a must-see for Cowtown visitors. Don't know the difference between the Tush Push and the Electric Slide? Sign up for free dance lessons, held every Monday and Thursday evening.

After a night of two-steppin', you may need to spend the next day relaxin'. Check out the following section for suggestions on how to unwind in Dallas.