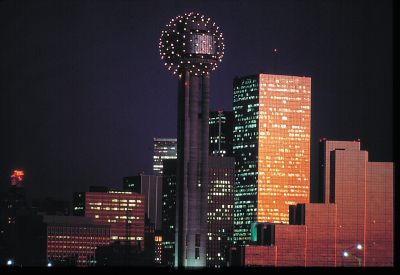 ©2006 Dallas Convention and Visitor's Bureau Be sure to ride up to the top of Reunion Tower during your Dallas visit.

As a booming corporate capital, Dallas has long been a showcase for important architecture, starting with the construction of the Old Red Courthouse in the late 1800s that signaled the creation of a justice system to move beyond the area's Wild West days.

In 1912, the city's Adolphus Hotel, with its ornate Edwardian Baroque style, would capture the attention of Dallas visitors just as it continues to do today.

The 1930s brought Art Deco architecture to Dallas, and today the city is home to Fair Park (1300 Robert B. Cullum Blvd). Its 277 acres of the country's largest collection of 1930s Art Deco architecture at one site and a favorite spot for visitors to stroll from museum to museum and admire the stylish exteriors.

Along with architectural styles, Dallas also showcases the works of some of the country's best-known architectural names: Frank Lloyd Wright, I.M. Pei, and Philip Johnson, each creating unique facilities.

Insider's Guide: The Best of Architecture & Landmarks in Dallas

A 68-second ride sweeps you up 55 stories to the top of the symbol of Dallas: the soaring Reunion Tower (300 Reunion Blvd), a column topped by a geodesic and glass dome complete with an observation tower, restaurant, and lounge. Although one of the most recognized landmarks in the metro area, it's joined by a host of other notable buildings ranging from historic to modern.

The internationally known I.M. Pei, famous for his addition of the Louvre's pyramid, has created several projects in downtown Dallas. One of the most notable is the Morton H. Meyerson Symphony Center (2301 Flora St), built in 1989 as the permanent home of the Dallas Symphony Orchestra. The building is the only symphony center designed by Pei.

The architect's Dallas City Hall (1500 Marilla St), noteworthy for its cantilevered facade, is a modern landmark. Another Pei landmark is downtown's Fountain Place (1445 Ross Ave), a green glass tower that rises from a base of waterfalls and fountains, considered to be one of the world's most complex computer-driven water spray works.

Other must-see places in the area include the Kalita Humphreys Theater (3636 Turtle Creek) designed by Frank Lloyd Wright, one of only three theaters designed by the famous architect.

Shopping in Dallas is truly an experience. Visitors can explore mega malls, flea markets, specialty boutiques, and more. See the next page for shopping tips.