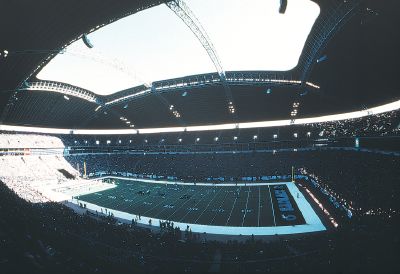 ©2006 Fort Worth Convention and Visitor's Bureau Texas Stadium hosts the Dallas Cowboys, a team whose name has become synonomous with football.

With 30 percent of the region's residents born either out of the country or of parents of foreign birth, the Dallas-Fort Worth metro area boasts a diversity that's reflected in its special events. Because of mild weather, spring and fall are the top months for festivals that range from the Asian Festival to the Diwali Festival. Areas such as DFW Chinatown and the Asia Trade District offer visitors cultural performances, shopping, and dining options with a uniquely Asian flair.

Thanks to its Dallas Cowboys connection (a football team actually based in Irving until 2009, when it moves to Arlington), the city is synonymous with sports action. College games also draw a serious crowd, especially to the season's three big events: the AT&T Cotton Bowl Classic in January, Grambling University vs. Prairie View A&M State Fair Classic in late September or early October, and the University of Texas vs. University of Oklahoma rivalry every October, all events that pack area hotels.

Not forgetting its Texas roots, equine sports are crowd pleasers as well. Dallas is home to the Interstate Batteries Texas Stampede rodeo every November. Mesquite's Resistol Arena hosts the Mesquite Championship Rodeo every Friday and Saturday night from April through September.

Fort Worth is home to many rodeos, too, including the Stockyards Championship Rodeo at the Cowtown Coliseum, holding the title as the world's first indoor rodeo.

Insider's Guide: The Best of Special Events & Attractions in Dallas

TV viewers know Dallas from the long-running TV show, where some scenes were filmed at Southfork Ranch (3700 Hodge Dr, Parker), located not in Dallas but in nearby Parker. The ranch still welcomes visitors from around the world.

A far darker side of Dallas history is recalled downtown at The Sixth Floor Museum at Dealey Plaza (411 Elm St), housed in the former Texas School Book Depository building from which investigations believe a gunman killed President John F. Kennedy on November 22, 1963.

The museum helps recall the president's life, death, and legacy through artifacts, historic films, interpretive displays, and photographs. A memory book also is available onsite to record your personal recollections of that horrible day in history, or you can read what others have written.

Dallas is synonymous with the Dallas Cowboys at Texas Stadium (2401 E Airport Fwy, Irving), but the city is home to many types of sports. Spectators can cheer for the NBA's Dallas Mavericks at American Airlines Center® (2500 Victory Ave); the NHL's Dallas Stars at Dr. Pepper StarCenter (2601 Avenue of the Stars, Frisco); and the Major League Baseball's Texas Rangers at Ameriquest Field in Arlington (1000 Ballpark Way, Arlington).

In downtown Fort Worth lies historic Sundance Square Entertainment District (4th and Main sts), a 20-block area named for the famous Western bandit, The Sundance Kid, who, along with partner Butch Cassidy, spent time in the area. The beautiful landscaping, redbrick streets, and turn-of-the-century buildings make this district a delight for pedestrians. You'll find numerous shopping, dining, and art opportunities, too.

Just more than two miles north of downtown stands the Fort Worth Stockyards National Historic District (121 E Exchange Ave), once the second largest stockyard in the country with cattle pens that extended nearly one mile. Today the area is a favorite tourist stop with Western shopping, a twice-daily cattle drive, rodeos, and dining.

Fort Worth also offers a surprisingly diverse array of attractions beyond its Wild West flavor, including the first-rate Fort Worth Zoo (1989 Colonial Parkway) and the Fort Worth Water Gardens (between Houston and Commerce sts), which features enormous concrete, terraced water gardens containing a variety of foliage, trees, and spectacular water cascades and fountains.

Another favorite in the Fort Worth area is Billy Bob's Texas (2520 Rodeo Plaza), deemed the "The World's Largest Honky Tonk." The facility includes bull-riding exhibitions and live country music and dancing.

Fort Worth also hosts its share of special events. Some of the largest take place at the Will Rogers Memorial Center (3401 W Lancaster Ave). Located in the Cultural District, the center plays host to the annual Southwestern Exposition and Livestock Show and events ranging from flea markets to bridal shows.

From art festivals and museums to a symphony and Broadway shows, the Dallas Arts District is a sheer delight for visitors looking for a bit of culture during their trip. See the next section for more information on the arts and culture scene in Dallas.