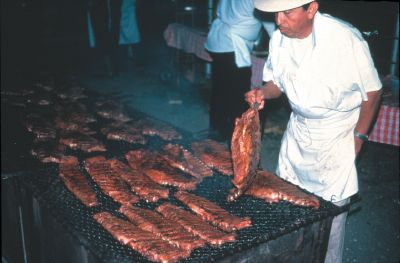 ©2006 Dallas Convention and Visitor's Bureau Barbecue is an institution in Texas. Be sure to experience it at least once during your visit to Dallas.

At the mention of Texas dining, you might picture chicken fried steak or barbecue. Dallas has all that but a whole lot more. In fact, the Big D boasts four times more restaurants per person than New York City.

The Texas-sized selection ranges from Asian fusion to Southwestern to French and everything in between. But remember, no matter where you choose to dine, the average tipping rate is 15 percent.

A spectacular view -- both of the city and the veritable art gallery that surrounds diners -- shares the spotlight with dishes like venison loin and prosciutto wrapped chicken breast at the Mobil Four-Star Nana's (2201 Stemmons), located on the 27th floor of the Mobil Three-Star Hilton Anatole.

Of course, no Texas dining experience could be complete without at least sampling the state's legendary barbecue. Dallas has its fair share of top contenders, including Sonny Bryan's Smokehouse. The popular eatery has many locations throughout the area, but for a true Dallas experience, head to the original location at 2202 Inwood. You'll enjoy your sliced brisket and sausage sitting at old school desks in the always-packed restaurant.

In Fort Worth, Cattlemen's Steak House (2458 North Main St) has been pleasing diners since 1947. Located in the historic Stockyards next to Billy Bob's Texas, the restaurant is, quite predictably, known for its grilled steaks, especially the 16-ounce Texas T-Bone and the 24-ounce Cattlemen's Porterhouse.

There's more than beef and barbecue in Fort Worth, however. One of the area's top French restaurants, Escargot (3427 W Seventh St in Chicotsky's Center) lures diners with dishes like salmon Wellington topped with chopped mushrooms and pan-seared sea bass.

Mobil One-Star Ziziki's (4514 Travis St, Dallas) is the place to go for the very best Greek food, like rack of lamb or Greek Island Chicken, and champagne/mimosas while sitting in a lovely courtyard.

At the Oceanaire Seafood Room (13340 Dallas Pkwy), choose from more than 25 varieties of fresh fish flown in daily from around the world as you sit in a room that looks like a 1930s era ocean liner. While you wait for your main meal, you can nibble at the oyster bar.

Terilli's Restaurant and Jazz Bar (2815 Greenville Ave) is the place for northern/southern Italian cuisine, like veal or chicken sauteed in garlic butter, and their signature Italian nachos, consisting of pizza dough topped with red sauce, different cheeses, and your favorite meat topping.

Before you book your trip to Dallas, check out the suggested itineraries on the next page to help you plan your days.