Getting In, Getting Around Dallas 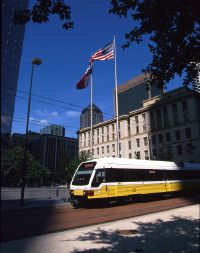 ©2006 Dallas Area Rapid Transit DART bus and light rail systems can take you to and from the airport as well as around downtown.

Buy a map and stick to the right lane, and you'll be headed in the right direction in terms of getting around the Dallas-Fort Worth area. The following tips should also help.

Here's a trivia question for your next road trip: Is the Dallas-Fort Worth International (DFW) Airport located in Dallas or Fort Worth? Well, actually neither. The massive airport (with flights of four hours or less to every major city in the United States, Canada, and Mexico) is located in the community of Grapevine, located west of Dallas and north of Fort Worth.

Dallas is also home to Love Field Airport, located within the city limits and within a few minutes' taxi ride from downtown.

Car rental: Car rental agencies at the airport make it easy to get around the metro area. From each terminal's baggage area (lower level), look for the rental car signs. Follow these outside the terminal, where a shuttle labeled "Rental Car" will transport you to the rental car center, a 10-minute ride. These complimentary shuttles leave every five minutes.

Taxi: Taxi service is readily available in each terminal at DFW International Airport. Proceed to the upper levels of each terminal and look for the uniformed Airport Ground Transportation personnel.

Taxis at Dallas Love Field are located in the upper levels across the street from the baggage claim wing of the main terminal building.

DART also operates the Trinity Railway Express (TRE), a light rail service linking DFW International Airport with locations in Dallas and Fort Worth from Monday through Saturday only. The one-way cost varies from $.50 to $2.25 per person, depending on where you get on. When TRE ends at the airport parking areas, passengers can transfer onto airport terminal shuttles.

Rush hour: With its myriad interstate highways, maneuvering Dallas requires a good map. The average Dallas-Fort Worth driver is delayed a total of 60-plus hours per year. Traffic can be fierce during rush hours, especially from 6:30 am to 9 am and 4 pm to 6:30 pm.

One project that has helped Dallas traffic on the interstate highways in the city was the addition of the High Occupancy Vehicle (HOV) lanes. You'll find the lanes clearly marked; driving in one of them requires at least two people in the car.

Rules of the road: As in most large U.S. cities, Dallas traffic can be challenging. On most beltways and expressways, stay away from the left lane unless you're prepared to drive a bit over the posted limit. Around the ubiquitous road construction projects, it pays to relax and "go with the flow" when lanes converge around construction zones.

It's always a good idea to signal your lane changes, but don't expect every car to comply. And when you approach tollbooths, try to use correct change and don't try to ask directions from the tollbooth attendant.

You'll find good signage throughout most of the region, but heavy traffic and continual name changes to roads make it smart to have a pre-planned route. Basically Interstate 20 and Interstate 30, east-west routes, connect Dallas and Fort Worth. Both cities are sliced north to south by a version of Interstate 35; Interstate 35 East runs through Dallas, while Interstate 35 West goes through Fort Worth.

Public transportation: Dallas has expanded its Dallas Area Rapid Transit (DART) light rail system to serve Richardson, Garland, and Plano as well as downtown Fort Worth. You'll find free parking at most of the rail stations. Day passes are $2.50 for local bus and rail service or $4.50 for premium routes, including express service and connections to DFW International Airport.

For travel in downtown Dallas, the historic McKinney Avenue Trolley is a fun option. The state's only historic streetcar system is now called the "M-Line" and offers free service to Dallas's entertainment districts and the downtown Arts District, Uptown, and the West Village dining and shopping area. The line runs daily every 15 minutes during peak weekday times or every half-hour otherwise.

Taxis, on foot, or by bike: Taxis are a good option for travel within Dallas, but because of the size of the metro area, they can be an expensive choice for more distant rides. The average cost of a taxi is $1.80 per mile. Cost (and maximum number) for additional passengers varies depending on the taxi company, but expect to pay $2 for each additional passenger.

Within specific neighborhoods, walking and biking are possibilities but generally aren't practical for visiting multiple areas of the Dallas-Fort Worth area. Bicyclists and pedestrians do find a good option along the Katy Trail, a work-in-progress that runs through the most densely populated portion of Dallas. The trail runs from the West End and the American Airlines Center in the south to the Southern Methodist University campus and the Mockingbird DART Station in the north.

Also under way is the downtown Trinity River Corridor. When completed, the district will be larger than New York's Central Park and will include a hike and bike trail, portions of which are already opened. The corridor follows the banks of the Trinity River downtown, adding an ecologically sensitive district to the urban landscape.

There's nothing more "Texas" than football, but sports isn't all Dallas has to offer. Visitors to this southern city will find cultural performances, great shopping, fun festivals, and more. See the next section to learn about Dallas's special events and attractions.