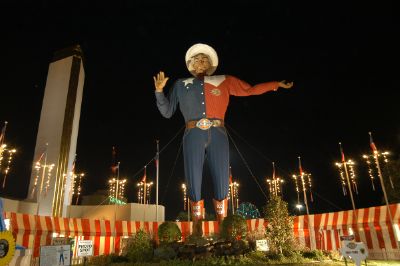 ©2006 Dallas Convention and Visitor's Bureau Big Tex has presided over every Texas State Fair since 1952. See more pictures of Dallas.

Everything's bigger in the Lone Star State -- one reason the "Big D" holds a special place in the hearts of many Texans. The term's no idle homily, though: The "Big D" really is big. Surrounded by a metro area that covers 12 counties and spans nearly 9,000 square miles, Dallas lives up to its new tourism slogan, "Live Large. Think Big."

As home to the country's largest urban arts district, the city is also undergoing a downtown renaissance with $1 billion in improvements underway, all resulting in a chic new image that highlights the fine dining, cultural opportunities, and world-class shopping for which the city is known. It all goes hand-in-hand with a city that's famous for both its oil business and convention business.

In spite of Dallas's city slicker image, however, a true Texas atmosphere is never far away. Not only is Dallas home to the month-long State Fair, but nearby Fort Worth is a cowboy capital nicknamed "The Place Where the West Begins." This city's Western heritage is seen in everything from its artwork to its shopping to its downtown nightlife.

The Best of Dallas

Perhaps more than any other Texas city, Dallas seems familiar even to first-time visitors. As home of the Dallas Cowboys, the city where President John F. Kennedy was assassinated, and the hometown of the longtime Dallas television series, this destination is no stranger.

Dallas has long been known as an excellent shopping destination for both consumers and retailers, thanks to the Dallas Market Center, the world's largest wholesale merchandise market, and the original Neiman-Marcus department store, a true symbol of Texas wealth.

Smaller and less hurried than its neighbor to the east, Fort Worth offers a diverse array of attractions, from the Fort Worth Stockyards with its historic hotels, rodeos, and western shopping to a first-rate zoo and a cluster of excellent museums in the Cultural District.

Halfway between Dallas and Fort Worth, Arlington is home of the American League's Texas Rangers baseball team and the region's theme parks, earning it the slogan "Fun Central."

©2006 Dallas Convention and Visitor's Bureau The Dallas Museum of Art is part of the acclaimed Dallas Arts District.

Geography and landscape: Dallas is located on a sprawling expanse of prairie in north central Texas. Fort Worth sits 35 miles to the west of Dallas's high rises. Rolling hills break up some parts of the prairie, resulting in an elevation that ranges from 450 to 750 feet above sea level.

Although the Gulf of Mexico's waters lie more than 300 miles away, water is found throughout the metro area thanks to many rivers and lakes. Dallas is located in the headwaters of the Trinity River and is also home to the expansive White Rock Lake.

General orientation: The Dallas-Fort Worth-Arlington metropolitan area is composed of Dallas to the east and Fort Worth to the west, and these cities are divided and surrounded by an array of smaller communities that include Irving, Grapevine, Grand Prairie, Plano, and more.

Downtown Dallas is a mass of highways, tucked north of Interstate 30, east of Interstate 35E, and west of US Highway 75, better known as Central Expressway; from these highways branches a grid system anchored by Main Street. Woodall Rogers Freeway divides downtown's West End and Arts District from Uptown.

Throughout this area, the soaring Reunion Tower, with its distinctive dandelion shape, is an easy-to-spot landmark even among the Dallas skyscrapers; it stands just east of Interstate 35E, not far north of the Interstate 30 intersection.

Safety: As the country's ninth largest city, Dallas has its share of big-city crime but is generally a safe destination for tourists. As with other destinations, visitors are encouraged to remain in well-lit areas at night. South Dallas is an area to be avoided at night, and even in the daytime travelers should be aware of their surroundings in this district.

Climate/weather: Weather is a hot topic in Dallas. Summer days average in the upper 90s with 100-plus degree days not uncommon and humidity levels making it feel even hotter. Air-conditioning (and sometimes a little too much air-conditioning) is a part of life here.

Late spring marks the time for the threat of severe weather in the region, with tornados likeliest in May and June. Winters are mild; January averages range from 33 to 54 degrees Fahrenheit, although ice storms and occasional snow do appear.

Like most big U.S. cities, Dallas can be difficult for tourists to navigate, especially by car. See the next section for tips and information on such public transportation options as DART.