The History of the Cuyahoga Valley 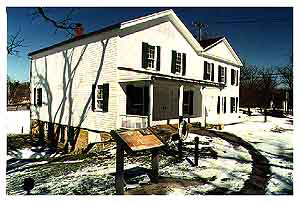 ©2006 National Park ServicesIn the heyday of the Ohio & Erie Canal, Hell's Half Acre served at various times as a residence, store, and tavern.

The history of the Cuyahoga Valley revolves around the Ohio & Erie Canal. The canal provided Ohio residents with waterways south to the Ohio River and north to Lake Erie, creating essential links to the eastern agricultural markets.

Construction of the canal began in 1825 and was completed seven years later. The canal became the main means of transportation of wheat to the eastern states, and at its peak, included more than 1,000 miles of main line canals, feeders, and side cuts.

The introduction of railroads and poor management of the canal caused its decline in the late 1800s. In 1913, when a great flood struck, the canal was abandoned. Today, Towpath Trail in Cuyahoga National Park follows the route of the former canal as it once traversed the park. As visitors follow the trail, they can stop at these historical sites to learn about the once-vital canal:

Village of Peninsula: When Peninsula was established, the site was on a peninsula formed by a horseshoe bend in the Cuyahoga River. The quaint village is no longer on a peninsula because mill owners re-routed the river to utilize its power. Today antique shops, art galleries, restaurants, and the Cuyahoga Valley Scenic Railroad depot can be found in Peninsula.

Many other locks and historic sites pepper the Towpath Trail, recalling 19th century life along the Ohio & Erie Canal. The trail can be navigated by foot, horse, or bike, so travelers can enjoy the sights at their own pace.

Cuyahoga Valley National Park is unique in many ways. It is located near two major cities and has thriving village communities and a golf course. At the same time, the park houses lush wilderness. It's a combination that three million travelers per year come to see.©Publications International, Ltd.