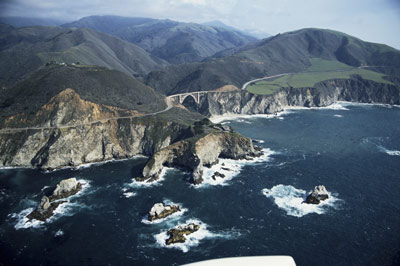 The Monterey, Calif., coastline. Monterey banned the cruise ship Crystal Harmony from the area after it discharged 35,000 gallons of wastewater into the area's marine sanctuary.
Briscoe-Knight/Getty Images

A floating resort packed with thousands of tourists and staff is bound to run into some trouble. The cruise industry has drawn the ire of many public health and enviro­nmental critics, not to mention law enforcement and legislators. Let's start with the environmental criticism first.

As you may expect, cruise ships generate several forms of pollution as they lumber through the seas.

Ballast water taken on to stabilize the ship can also disrupt ecosystems. Ships inevitably fill their ballast tanks in one location and purge them in a different area, thus introducing new species of marine organisms into different environments. Much like kudzu when it was introduced to the U.S., foreign microorganisms can infect or kill native plankton, sea plants, coral, and fish.

From a public health perspective, disease outbreaks on ships are also a concern. Most of the major cruise lines -- Carnival Cruise Lines, Norwegian Cruise Lines, Celebrity Cruises and Princess Cruises among others -- have ­reported outbreaks, according to the U.S. Centers for Disease Control. The organism responsible for getting passengers sick usually is the norovirus, a common virus linked to gastroenteritis (the "stomach flu"). Norovirus infections spread quickly on a cruise ship due to the close quarters. To see the cruise ship inspections for a particular ship, visit the CDC Vessel Sanitation program Web site, which posts inspection reports.

Probably one of the most frustrating aspects of traveling on a cruise ship is the lawlessness. Several critics point out that cruise companies are more concerned with protecting themselves from liability. Cruise companies are hesitant to have legitimate security forces onboard ships for fear of lawsuits from the public.

Overcrowding also has become a deterrent for people taking cruises, especially as companies like Royal Caribbean, Cunard and Carnival push the limits of occupancy. Lines to participate in the onboard attractions keep growing as ships like the Genesis hit the water. Slated to arrive sometime in 2009, the Genesis, with a price tag of $1.4 billion, will be 1,180 feet (360 meters) long and will accommodate 5,400 passengers at double occupancy [source: AP]. These mobs of passengers can also overwhelm a port call destination. But cruise ship companies show no signs of stopping their quest to build the biggest ship.