Inside a Cruise Ship: Amenities and Jobs 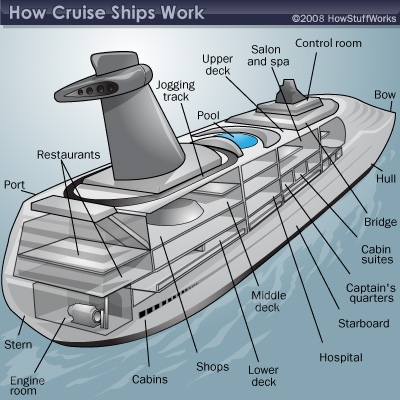 Cruise ships are designed with serio­us comfort in mind, so they have a lot of amenitie­s and a lot of staff to oversee those amenities for the as many as 3,000 passengers. These thousands of passengers are spread out over the ship's multiple levels called decks. For instance, the QM2 has 13 separate decks and carries up to 3,056 passengers and a crew of 1,253. If you're on deck 13, you would be standing on the highest level of the ship, whereas if you ventured down to the first deck, you'd be closer to the bowels of the ship.

If you booked passage on the QM2, you would likely find yourself staying in one of the Britannia staterooms (or cabins) located in the middle decks. The smallest of these rooms (typically 155 square feet to 250 square feet) contain a king-size bed, closet, television, a phone and a desk. Go with money to blow, and you could find yourself rubbing elbows with the other high rollers on a separate deck where the deluxe apartments and suites are. One of these rooms can be as big as 2,250 square feet. That's as large as a four-bedroom house. Whatever you need -- whether it's an Xbox or a bottle of bubbly -- these are the accommodations where you'll get it fast.

After a good night's sleep, you would probably head to the upper decks to eat breakfast, choosing from one of the many restaurants. Rather than returning to your stateroom after breakfast, you might hang poolside, shoot some hoops, shop, check out the golf simulator or gamble. Of course, you could always venture off the ship if you're at a port of call.

After a packed day, nightfall brings with it more food. You may want to try a formal restaurant or grab something quick at one of the grills. With dinner done, the nightlife begins. If you're in the mood for the opera, you'll need to book a reservation at the Royal Court Theatre. Perhaps you just want to hang out, have a few drinks and dance at the Q32 Nightclub.

Wherever you are on the cruise ship and whatever you're doing, it's likely that a crew member isn't too far away since cruise ships employ very large crews, well over 1,000 people. Here's a list of some of the more nautically inclined crew members and some of their responsibilities.

In addition, some­ of the staff focuses less on how the boat is running and more on how you're enjoying yourself. Since cruise ships truly are hotels on the sea, some of the folks you may encounter include bartenders, plumbers, electricians and ushers. Working on a cruise ship can be rewarding and financially appealing. Employees can earn up to five times what they might make on land, depending on which ship and company they work for.

But not everything is fun and games when you're sailing along with thousands of strangers over the open seas. The next section points out some of the drawbacks of cruise ships.