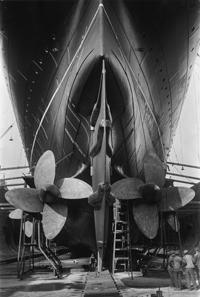 The propellers on this superliner are easy to spot while this boat is dry-docked.
Topical Press Agency/Getty Images

Without a source of power, these mammoth cruise ships would be nothing more than hotels drifting aimlessly. So what are the options? Many older cruise ships use reciprocating diesel engines to generate power for propulsion. The power of the engine is fed through a transmission to propeller shafts. Transmissions determine the revolutions of the propellers, much like the transmission transfers the engine RPM into manageable speeds to power the rear wheels in our cars. Modern cruise ships use either gas turbine or diesel electric engines as their power source for propulsion, as well as for the ship's systems. The larger the cruise ship, the greater the demand for electrical power. Some larger ships rely on two different power sources: one for propulsion and one exclusively for electrical power.

Aero derivative gas turbine engines generate heat that is converted from mechanical energy into electrical power. To achieve this, compressed air is ignited in a combustion chamber. The hot exhaust is forced over a turbine that spins to mechanically drive a shaft. This power can then be used to spin electrical generators. Diesel-electric engines work much the same way, yet use a direct drive system rather than a turbine. Output shafts are connected to electrical generators to produce electrical power.

Both engine types require fuel, and lots of it. For example, the QE2 consumes about 380 tons of fuel daily if it's traveling at a speed of 28.5 knots and carries enough fuel to sail nonstop for 12 days [source: Warwick]. Cruise ships usually fill up at various ports, using fueling barges like floating gas stations. They use a lower-grade diesel that tends not to burn as cleanly as road-going diesel-powered vehicles. No doubt when prices rise at the pump, cruise ships also feel the pinch.

All cruise ships rely on propellers to push them through water. Propellers, commonly referred to as screws, cut through the water and provide forward or reverse motion. Unlike airplanes, which require tremendous propeller speeds to provide the forward motion needed for flight, cruise ship propellers do not need to turn as fast. They rely on torque, or brute power, over RPM, or high speed. Therefore, cruise ships travel slowly, rarely topping 30 knots.

Newer, cutting-edge cruise ships, like the QM2, use azimuth thrusters, which are pods housing propellers that can rotate 360 degrees and provide optimum maneuverability. These thrusters replace rudders and are thought to have several benefits over conventional screw-type propeller systems, such as decreased stopping distance and greater fuel efficiency [source: AP]. They can be used with either gas turbine or diesel electric engines.

If the Titanic had been equipped with azimuth thrusters, things might have turned out differently. One of the Titanic's downfalls was its inability to turn quickly to avoid the iceberg that ripped the bow open. Traditionally, cruise ships rely on rudders and differentiating propeller speed to turn, but ships equipped with azimuth thrusters turn much more quickly, so more cruise ships are incorporating this technology.