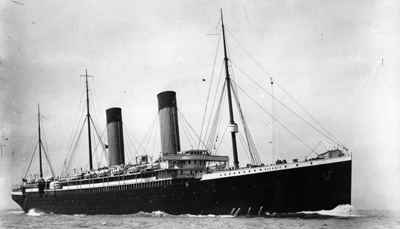 The Oceanic, the largest liner in the world when it was built by White Star Lines and launched in 1899, became beached in Scotland due to poor navigation.
Getty Images

Everyone likes to go on vacation, right? Well, during the latter part of the 19th century, the world developed an appetite for travel. Trave­ling by sea was nothing ne­w, but it wasn't exactly speedy. Thomas Newcomen changed that in 1712 when he invented the steam engine, a revolutionary way to harness kinetic energy and convert it to power.

As the steam engine evolved, so did its uses, until in 1819 the first American ship aided by a steam engine crossed the Atlantic. The S.S. Savannah left from the U.S. city bearing its name on May 22, 1819, and arrived in Liverpool, England, 29 days later. While the Savannah only used its steam engine for approximately 85 hours (roughly 12 percent of the trip), the voyage made history, and the era of the steamship began [source: Columbia Encyclopedia].

The passenger ship industry flourished in the late 1800s and early 1900s, courtesy of the steam engine and of the growing number of American immigrants crowding ocean liners. Trans-Atlantic passage was still primarily one way, although affluent passengers traveled back and forth between England and New York for business or holiday.

Ambitious British shipping company White Star Lines began aggressively building the first fleet of ocean liners in 1849 and would revolutionize trans-Atlantic passage over the next 60 years. White Star set records in size and grandeur, building, among others, three large ships dubbed Olympic Class liners. The Olympic, Britannic and Titanic broke the mold of traditional ocean liners, and their speed and interior features made other ships look obsolete. But ocean travel was on the verge of changing.

The popularity of trans-Atlantic sea passage gradually declined with the arrival of the airplane. People could fly to more destinations in a fraction of the time it took on an ocean liner, so shipping companies changed their business model to focus on tourism instead of passenger transportation. In 1900, the American-Hamburg Company built the first ship specifically designed for cruises. The Prinzessin Victoria Luise measured 406 feet (124 meters) long by 52 feet (16 meters) wide, and was 4,409 gross tons [source: Norway-Heritage]. (In nautical terms a ton, typically called a gross register ton or gross ton, does not measure weight; it represents 100 cubic feet of internal capacity.)

Since the early days, cruise ships have shared one universal goal: Don't sink! Learn how they try to avoid that fate on the next page.

The Big Sister That Never Would

The Britannic was the lesser known, but largest and most extravagant, of the three Olympic Class ocean liners built by White Star for trans-Atlantic voyages. However, just months after its completion, the British government enlisted the liner for use as a hospital ship during World War I. The British government retrofitted the liner for its new role in the war effort -- ferrying wounded from Italy to England -- and sent it on its maiden voyage on Dec. 23, 1915, without any of the fanfare the Titanic enjoyed. Less than a year later, HMHS Britannic struck a mine and began sinking at the bow. In just 55 minutes, faster than the sinking of the Titanic, the Britannic sank in the Mediterranean. Of the more than 1,000 people onboard, 30 people died. It remains the largest sunken ocean liner, having never carried a paying passenger. [source: PBS]