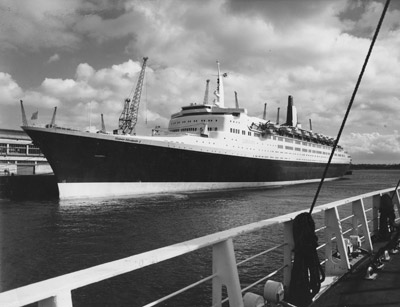 In 1933, two struggling British shipping companies treaded water as the Great Depression sunk hundreds of businesses. Cunard and White Star Lines merged in 1934 and currently operate under the Cunard name, sailing cruise ships you've pr­obably heard of, like the Titanic and the Queen Elizabeth 2, or the QE2, and popularizing the idea of luxury travel by sea.

Unlike the more common cruise ships that ferry people from port to port in the Caribbean, the Mediterranean and some many other corners of the world (including Antartica), these old-school ocean liners still offer that original voyage that so many people signed up for: trans-Atlantic sea passage. Launched in 1967, the QE2, the largest and most extravagant ocean liner of its time built at a cost of $29 million, has made more than 800 trans-Atlantic voyages and logged more than 5.5 million nautical miles [source: BBC, Cunard].

For nearly half a century, the QE2 ruled the open waters as a reminder of an era gone past -- when people sailed instead of flew, when they packed steamer trunks instead of wheeled suitcases. But times have changed, and even great ships have a lifespan. The QE2, which docks in New York Harbor, sets sail one last time in fall 2008. The Dubai government has purchased the historic vessel for $100 million and plans to turn it into a fancy hotel. While the QE2 is sailing into the sunset, she has plenty of friends that plan to stick around and take advantage of the lucrative cruise industry.

As you are soon to learn, cruise ships like the QE2 are floating resorts full of activities and fine dining. This article will explore the history, mechanics and inner workings of cruise ships, as well as how these giants manage to stay afloat. You'll also hear some cruise ship criticism. So grab your boarding pass and let's set sail through the world of cruise ships.