History: How Crater Lake Was Formed 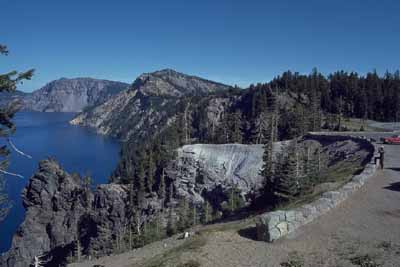 ©2006 National Park Services Standing on the edge of a tranquil Crater Lake, it's difficult to imagine that in this very spot, thousands of years ago, the great Mount Mazama erupted for the last time, spewing volcanic ash and smoke for miles.

Upon viewing the miles of blue water at Crater Lake National Park, visitors often speculate: How did a lake get on top of a mountain? Geologists believe the story begins long ago when Mount Mazama, a great volcano possibly 12,000 feet above sea level, formed as part of the chain of volcanoes in the Pacific Northwest that includes Mount Shasta and nearby Mount St. Helens.

Indian legends that relate to quarreling between the deities of heaven and the netherworld have helped geologists construct a reasonably accurate timetable. The peak was built of lava flows, ash, and debris from repeated eruptions. About 4860 B.C., Mount Mazama erupted for the last time.

This gigantic explosion catapulted volcanic ash and smoke miles into the air. After the blast, Mazama's peak remained as a shell over a hollow interior. Apparently, the ancestors of the native people who knew the legend of Mazama watched the summit finally collapse with a deafening roar. This geologic event created a huge smoldering caldera.

The distance from the surface of the lake to its bottom is 1,932 feet, which makes it the deepest lake in the United States. Water has accumulated here over centuries as rain and snowmelt filled in a huge caldera. This vast bowl is the remnant of a volcano.

Because no water flows into or out of the lake, its waters contain few minerals and almost no impurities. The lake's only fish, rainbow trout and kokanee salmon, were introduced by people. Forests of hemlock, pine, and fir and meadows of wildflowers grow in the lava and ash on the rim of the caldera. Today, bobcats, deer, marmots, bears, hawks, and eagles make this place their home.

Scientists today still do not fully understand the ecological character of the lake. Evidence of hydrothermal venting near the lake's bottom was discovered by manned submarines in 1989. This hot water may play an important role in the lake's ecology. Recently, green algae has been found growing at a record depth of 725 feet. This indicates to scientists that sunlight may penetrate deeper in Crater Lake than in any other body of water in the world. The lake's purity and its depth also account for its startling blue color.

Most of the park's tourist traffic occurs in the summer, when the snow has melted, the wildflowers have bloomed, and the birds are flitting from tree to tree. But every winter, the park opens in clear weather, and adventurous travelers return to traverse the deep snows using snowshoes or cross-country skis. In either warm or cold weather, Crater Lake National Park is a beautiful, tranquil getaway.