Historical Exploration of the Congo River 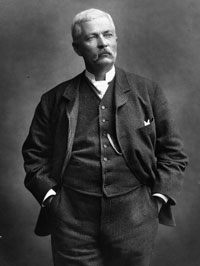 In May 1482, Diogo Cão sailed from Lisbon, Portugal, to the African coast. His crew was in desperate need of drinking water when Cão noticed muddy brown water rushing into a bay. He followed the source of the water and inadvertently discovered the Congo River.

Cão's crew was fascinated by the exotic animals along the Congo. They settled into a cove and stayed there for a month. The Portuguese struck up a friendship with the native Bakongo tribe. Cão sent some of his men upstream to find the Bakongo king, Manikongo. Cão didn't wait for them to return, though it's not clear why. He sailed home and took a few Bakongo to introduce to his ruler, King João. They were regarded as visiting dignitaries, and Cão brought them back to the Congo when he made another voyage (his last) in 1484. He never found his men or Manikongo, and he mysteriously disappeared when a giant waterfall impeded his ship's course along the river.

For many years, the Congo was a repository for failed explorations. People sought their riches in the heart of Africa, and they died trying. There were wild rapids, ferocious animals, unpredictable weather, wary natives and mysterious diseases. Many expeditions failed because people simply couldn't penetrate the Congo. Without native river guides, it was impossible to travel the river -- its sandbars were constantly shifting and changing the river's course. Watercraft could be destroyed on impact if they hit a sandbar -- or snagged on a crocodile's jaw.

The ever-changing Congo couldn't be charted, but it did become more manageable. Determined nations dispatched more explorers and set up permanent stations along the riverbanks. These included Portuguese sailors like Francisco José de Lacerda and Arab traders, who became invested in slave and ivory trades. Christian missionaries traveled to the Congo in hopes of converting the Congolese, who worshipped inkissi (fetishes) [source: US Navy].

Belgium's King Leopold II was determined to claim the coveted Congo -- he'd missed out on the land scramble in the East Indies and North Africa [source: Jampoler]. For his effort, he recruited Henry Stanley, a journalist for the New York Herald. Stanley was famous for finding the stranded Scottish missionary David Livingstone at the shores of Lake Tanganyika, and he was notorious for defecting from the Union Navy during the Civil War. Stanley was an experienced candidate. From November 1874 to August 1877, he'd trekked across 6,500 miles (10,460 km) of the Congo. (Even today, he's the only known Westerner to have travelled to the entire length of the Congo River.) Hundreds of Africans on the trek and Stanley's three British companions died along the way.

In August 1879, Leopold commissioned Stanley's next expedition. Stanley remained in the Congo until 1884, setting up 22 small towns along the river and guiding the effort to establish four steamers on the Congo [source: MSN Encarta]. He also helped build a road along the lower Congo. In 1885, Belgium officially gained control of the land -- the Congo Free State became the Belgian Congo. It remained in Belgium's hands until the mid-20th century.

How did colonialism lead to such bloody battles and an industrial wasteland? In the next section, we'll see why today's Congolese people are wondering just where they fit into the global economy.­