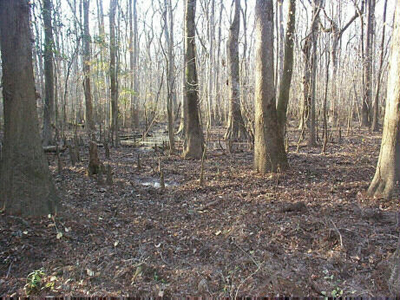 Established as a national park in 2003, Congaree is a primal forest on the river of the same name. The park is situated about 20 miles southeast of Columbia Airport in central South Carolina and contains some of the tallest trees in the eastern United States. Park visitors can follow a canoe trail down Cedar Creek, the preferred exploration method in Congaree. However, travelers should be aware that they must bring their own canoe or kayak, as the park does not rent or provide them.

Other services: A ranger station

Congaree National Park contains the largest contiguous tract of old-growth floodplain hardwood forest in the United States. Because of the diversity life -- hundreds of species of plants and animals -- supported by the Congaree ecosystem, the park is designated an International Biosphere Reserve. Keen observers may note river otters and box turtles paddling in the creek, or catch a glimpse of a red-headed woodpecker foraging for food. Other common sightings include the white-tailed deer, skinks, and brown water snakes.

The 75 species of trees that grow in the bottomland forests of Congaree National Park provide a life-sustaining habitat for all kinds of mammals, fish, reptiles, and birds. Continue to the next page to learn about wildlife you can see at the park.

©2006 National Park Services The red-cockaded woodpecker is one of the many unusual species of birds that inhabit the park.

The soaring trees of Congaree National Park are some of the tallest in the eastern part of the country; together they make up one of the highest forest canopies in the whole world. Types of trees run the gamut from cedar to cypress to pine; there are 75 species in all. The most commonly encountered trees and shrubs are tupelo, laurel oak, ironwood, American holly, loblolly pine, cherrybark oak, paw paw, water oak and bald cypress.

Among the forest, there are four national champion trees (largest of their species), including the impressive loblolly pine at a soaring 167 feet. These aren't the only tall trees in the park; many are over 140 feet and have 3 to 4 foot trunk diameters. Sadly, some of the largest trees were felled by Hurricane Hugo in 1989.

The park draws recreational visitors in the form of boaters, hikers, anglers, and campers. While the park has several well-developed trails, the canoe is the vehicle of choice for those who want to see Congaree's pristine heart; administration has marked several canoe trails that vary in length and difficulty. Cedar Creek is the body of water of choice here, as there is no vehicle access to Congaree River.

Beyond the numerous recreational opportunities, many visitors come to the park to try to catch a fleeting glimpse of Congaree's abundant wildlife, highlighted by about 175 bird species. On that long list are eight woodpecker species perfectly adapted to this dense forest, including the endangered red-cockaded woodpecker.

The park's mammal checklist includes such creatures as river otters, mule deer, opossums, bobcats, flying squirrel, and wild boar. There are 19 snake varieties, including the cottonmouth, copperhead, canebrake rattlesnake, and coral snake, which are poisonous. Visitors may encounter any of 10 kinds of salamander, 19 frog and toad species, 8 turtle varieties, and 5 types of lizard.

Whether travelers are hiking, canoeing, or following a ranger-led owl prowl or tree trek, they should take a moment to check the Mosquito Meter before they head out. Ratings range from All Clear up to War Zone, and visitors will want to apply their bug spray accordingly.

The floodplains of Congaree National Park are inhabited by a profusion of wildlife that plant and animal lovers alike can spend hours viewing. Here are some suggestions for capturing the park's highlights on film: 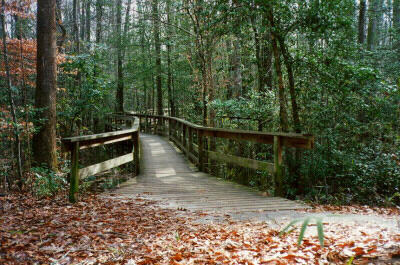