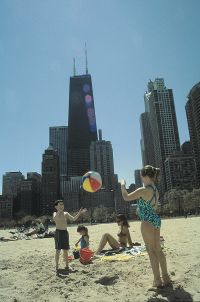 ©2006 Chicago CVB Chicago's Oak Street Beach is just one of many beaches you'll find along the city's Lake Michigan shoreline.

Although Chicago may bill itself as "the city that works," Chicagoans relish their leisure time. Maybe it's a result of the long, gray winters, but locals take advantage of every second of sunshine by walking, biking, or simply hanging out at the lakefront. Although the bike paths may be crammed with runners and bikers, there are ample grassy spots for lounging, picnicking, and simply contemplating the tranquil waters of Lake Michigan.

The city's many cafes are also places to relax and let loose from the rush of city life. Although Chicago can keep visitors busy with a non-stop schedule of must-see sites, sometimes the best way to experience it is from the sidelines, sipping a cappuccino.

Insider's Guide: The Best of Relaxing & Unwinding in Chicago

Insider's Guide: The Best of Relaxing & Unwinding in Chicago

While North Avenue Beach and Oak Street Beach are the lively centerpieces of the Lake Michigan shoreline, locals know to head farther north when they want to relax. The stretch of lakefront between Fullerton Avenue and Addison Street is full of grassy stretches to lie out and spend an afternoon reading or simply daydreaming. Another contemplative spot is Olive Park, located just north of bustling Navy Pier; it's a good place to look back on the city skyline in peace and quiet.

If you're here in the summer, try to take advantage of the city's stellar classical-music lineup, offered in tranquil outdoor settings. The Grant Park Symphony and Chorus presents free concerts at the Pritzker Music Pavilion in Millennium Park (Michigan Avenue and Randolph St), with the dramatic city skyline as a backdrop.

In the northern suburbs, the Ravinia Festival (400 Iris Lane, Highland Park) presents a stellar lineup of classical music (including the Chicago Symphony Orchestra), pop groups, folk singers, and Broadway musical stars, all in a secluded, wooded, and very romantic park. Metra's Union Pacific North Line will drop you off right at the Festival's West Gate. Another option is to ride the Ravinia Special round-trip train that leaves the Madison and Canal station and makes six stops before reaching Ravinia Park for only $5.

To really get away from it all, plan a day trip to north suburban Glencoe to stroll the Chicago Botanic Garden (1000 Lake Cook Rd). The acres of themed landscapes -- from a walled English garden to an island of native prairie plantings -- provide ample space to escape crowds and take sustenance from nature.

Osaka Garden (6401 S Stony Island Ave in Jackson Park) features a tranquil strolling garden, moon bridge, Shinto gate, and typical Japanese foliage. It was created in 1934 as a thank you to Japan for a building given to Chicago for the 1893 World Columbian Exposition.

The closest golf courses to downtown are the 9-hole Sydney Marovitz Golf Course (3600 N Lake Shore Dr) in Lincoln Park, and the 18-hole Jackson Park Golf Course (63rd St and Stony Island Avenue) near Hyde Park. Sydney Marovitz gets crowded on weekends and attracts a lot of beginners, so be prepared for a slow round; Jackson Park usually moves faster. To practice your swing, head to the Diversey Driving Range (141 W Diversey Pkwy) in Lincoln Park or the Green at Grant Park (352 E Monroe St), an 18-hole putting course in Grant Park downtown.

©2006 Dave Gorman If you're strolling along north Michigan Avenue (also known as the Magnificent Mile), be sure to visit the historic Water Tower, one of the few buildings to survive the Great Chicago Fire.

During a Michigan Avenue stroll, stop off at the plaza surrounding the historic Water Tower (between Pearson St and Chicago Ave) for prime people-watching. You'll be surrounded by tourists from around the globe, local office workers on a break, and groups of wide-eyed students all taking in the busy scene.

In the summer, Oak Street Beach (near Michigan Ave and Oak St) is the perfect vantage point for checking out the beautiful people running and biking by. Oak Street Beachstro is a warm-weather-only beachfront cafe literally on the sands of the popular beach and a prime spot to enjoy fresh seafood, sandwiches, pasta, and beer while watching the world go by.

And the Crown Fountain in Millennium Park (Michigan Ave and Randolph St) attracts Chicagoans of all ages and ethnicities, splashing in the shallow water and taking in the giant faces projected on the massive surrounding video screens.

Chicago is a major city with an awful lot of things to see. If you'd rather not strike out on your own in the City with Big Shoulders, keep reading for our guide to Chicago organized tours.