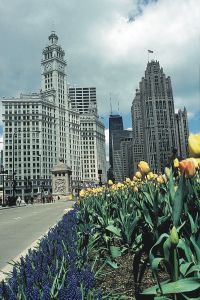 ©2006 Chicago Convention and Tourism Bureau The gleaming-white Wrigley Building [left] has a triangular shape patterned after the Seville Cathedral's Giralda Tower in Spain.

Faced with miles of ruined city after the Great Fire of 1871, Chicagoans didn't waste much time bemoaning their fate. Instead, they embarked on a massive rebuilding program. The urgent need for office space -- combined with technical innovations in cast iron construction and elevator safety -- inspired architects such as Louis Sullivan to create the country's first skyscrapers.

Later, thanks in large part to architect Ludwig Mies van der Rohe, the city became known as a Center of the International Style, characterized by stark, rectangular, glass-enclosed buildings free of ornamentation (the Sears Tower and the John Hancock Center are two famous examples). Today, Chicago remains a center of contemporary architecture, with new buildings by star architects such as Santiago Calatrava and Renzo Piano taking shape alongside classic buildings of the past.

But Chicago's great architecture isn't limited to office buildings. This is also the place that Frank Lloyd Wright developed his distinctive "Prairie style" homes, which took inspiration from the flat, wide-open Midwest landscape. A visit to at least one Wright home is de rigueur for visiting architecture buffs.

Insider's Guide: The Best of Architecture & Landmarks in Chicago

Insider's Guide: The Best of Architecture & Landmarks in Chicago

To see the highlights of Chicago's architecture in a limited time, head to the Chicago Architecture Foundation (224 S Michigan Ave), where you can pick from a number of daily tours. The Historic Skyscrapers Tour (offered daily at 10 am) and the Modern Skyscrapers Tour (daily at 1pm) are the most popular and give an excellent overview of what makes each building significant. You'll even check out some cool building lobbies that most visitors pass right by. The foundation also offers walking tours of various Chicago neighborhoods, history-themed excursions, and bus and boat tours.

The Cadillac-Palace Theater (151 W Randolph St) was inspired by the decadence of the Palace at Versailles in France, and boasts a lobby with huge decorative mirrors and breche violet and white marble, and gold leaf and wood decorations on the hallway walls. Macy's, the former home of Marshall Field's for years (111 N State St), features a six-story rotunda topped by a Tiffany dome made of 1.6 million pieces of glass.

The Chicago Loop Synagogue (16 S Clark St) was built in 1957 and its eastern wall is a unique example of contemporary stained glass depicting ancient Hebraic symbols whirling through the cosmos. The Chicago Temple (77 W Washington St) is the highest church spire in the city, at 568 feet from street level to its Gothic tower.

Holy Name Cathedral (735 N State St) is a good example of Gothic Revival architecture. The 1875 building features bronze doors, Stations of the Cross cast in bronze and framed in red Rocco Alicante marble, a six-ton tabletop altar made of granite, and a 5,558-pipe organ. And, the tasseled hats of deceased cardinals are hung from the highest point of the semicircular domed cathedral apse.

Marina City (300 N State St) is a unique condominium and commercial complex with marina and boat storage and two 550-foot-tall cylindrical buildings. The Rookery Building (209 S LaSalle St) is one of the oldest steel-skeleton skyscrapers in the world, with a glass-encased, sky-lit lobby that Frank Lloyd Wright remodeled in 1905.

The Wrigley Building (410 N Michigan Ave) has a triangular shape patterned after the Seville Cathedral's Giralda Tower in Spain, and its ornamental design is an adaptation of French Renaissance style. The outside of the building is clad with more than 250,000 glazed terra-cotta tiles that shine at night with the help of floodlights.

The Monadnock Building (53 W Jackson Blvd) was constructed in 1889-1891 and, at that time, was the highest wall-bearing building in Chicago. It includes 6-foot-thick walls to support the tower's 17 stories.

Architecture fans also should plan on taking a day trip to Oak Park to visit the Frank Lloyd Wright Home and Studio (951 Chicago Ave). This western suburb is where Wright began his career and developed his influential Prairie Style homes. Seeing Wright's low-slung, unassuming houses alongside the grand Victorian homes that also line the streets of Oak Park make vividly clear how revolutionary his work was at the time. In Chicago's South Side neighborhood of Hyde Park is Robie House (5757 S Woodlawn Ave), one of Frank Lloyd Wright's most significant residential buildings, especially notable for its stained-glass door and windows.

When you think about shopping in Chicago, you probably focus on the Magnificent Mile, a stretch of Michigan Avenue where you'll find shops for all the big-name upscale retailers. But there's more to Chicago shopping than the Mag Mile, as you'll discover in the next section.