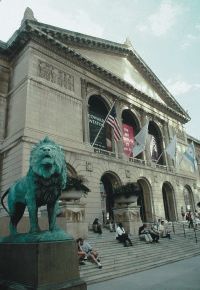 ©2006 Chicago Convention and Tourism Bureau With more than 300,000 works of art, the Art Institute of Chicago is the city's largest art museum.

Chicago's range of cultural offerings is what impresses visitors most, from high (the Chicago Symphony Orchestra, the Lyric Opera) to low (the many low-budget theaters that perform for passion rather than profit). The city's thriving gallery scene, concentrated in the River North neighborhood, has made the city a national center for contemporary art.

No matter what your cultural interests, you'll find a museum to suit your tastes. The Art Institute of Chicago is the city's reigning grand dame of fine art, while the newer Museum of Contemporary Art gives up-and-coming artists a chance to shine. The massive Field Museum of Natural History has entire galleries devoted to African and Asian art, many of them designed to teach visitors about an area's culture as well as its artifacts.

Insider's Guide: The Best of Arts & Culture in Chicago

Insider's Guide: The Best of Arts & Culture in Chicago

You could spend your whole visit to Chicago just visiting the city's museums (and, come winter, that doesn't sound like a bad prospect). The Art Institute of Chicago

(111 S Michigan Ave) is the acknowledged heavyweight when it comes to art, with a wide-ranging collection (300,000-plus works of art) and a busy schedule of tours and lectures. Its exhibits include Asian, African, Amerindian, and American art; European decorative pieces, and photography.

Although the Art Institute does include some modern works, the smaller Museum of Contemporary Art (220 E Chicago Ave) has given contemporary artists a much-needed showcase. The museum also supports more avant-garde works through its performing arts programs, which include everything from experimental film to cutting-edge modern music.

Chicago's modern art scene took off in the 1970s, as former factories and industrial warehouses in the River North area were converted into galleries. More recently, a wave of gentrification in the West Loop has nurtured a second gallery district.

There's no better way to check out the local art scene than to stop by a gallery opening, which are open to the public. Openings usually take place on Friday evenings from 5 to 8 pm.

When it comes to live arts and entertainment, the city's most prestigious venues are Symphony Hall, home of the Chicago Symphony Orchestra (220 S Michigan Ave) and the Civic Opera House, which houses Lyric Opera of Chicago (20 N Wacker Dr). The Lyric Opera, in particular, is a hometown favorite, with almost every show selling out. If you want to get tickets, your best bet is to call the box office the morning of a performance, when tickets returned by subscribers are re-sold.

The Harris Theater for Music and Dance, (205 E Randolph St), located in Millennium Park, hosts dance performances throughout the year by local and touring companies.

Chicago's theater scene is especially lively, running the gamut of touring Broadway shows to small, independent troupes in which the people on stage often outnumber the audience. Some of the city's best theater companies -- where you can be almost assured an evening of thought-provoking, well-produced entertainment -- include the Goodman Theatre (170 N Dearborn St), considered a breeding ground for up-and-coming actors and productions.

From skyscrapers to bungalows, Chicago's architecture is as distinctive as it is attractive. Go to the next section to learn about the unusual and innovative architecture and landmarks you can find only in Chicago.