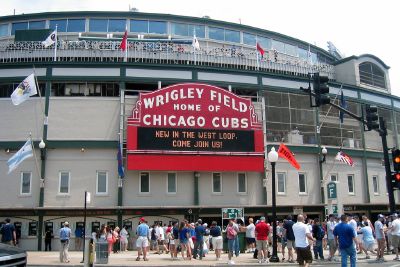 ©2006 Wally Gobetz Thanks to all of the Cubs fans across the nation, Wrigley Field sells out for nearly every game.

Summer is prime time for Chicago festivals. It seems like every weekend from Memorial Day to Labor Day is booked up with some kind of outdoor celebration, whether it's the free outdoor concerts in Grant Park that make up the Chicago Blues Festival in June or the roaring of jet engines overhead during the Air & Water Show in August.

But Chicago has something to offer even during less balmy weather. While visitors might be wary of heading to town during the winter, Chicago's many museums (in addition to being well heated) are far less crowded than during prime tourist season. (Another bonus: you'll save big on hotel rates.)

The city's St. Patrick's Day celebration in March is another huge draw: not only does a large parade, featuring our proudly Irish mayor, snake through downtown, but the Chicago River is dyed green for the occasion. And fall has its share of special events, too, from the Chicago Marathon in October to November's Humanities Festival, which attracts well-known writers and performers from around the world.

Insider's Guide: The Best of Special Events & Attractions in Chicago

Insider's Guide: The Best of Special Events & Attractions in Chicago

To get the full Chicago experience, plan on a mix of indoor attractions and outdoor relaxation. The grand downtown museums welcome plenty of tourists, but special exhibits and blockbuster shows at the Art Institute of Chicago (111 S Michigan Ave) and the Field Museum of Natural History (1400 S Lake Shore Dr) attract flocks of locals, too. A visit to Chicago wouldn't be complete without stopping at one of these world-renowned institutions.

The Loop is bounded on the west and north by the Chicago River, on the east by Lake Michigan, and on the south by Roosevelt Road. Locals call it the historical center of downtown Chicago or the heart of Chicago's business district. A walk around its bustling streets on a weekday is guaranteed to give you a true big-city rush.

Between The Loop and Lake Michigan lies Grant Park (331 E Randolph St, stretching from Randolph St to McFetridge Dr), a miles-long stretch of green space where you can walk at a more leisurely pace. Set within the northwest corner of Grant Park is Millennium Park (east of Michigan Avenue, between Randolph and Monroe sts), a showcase for public art and the setting -- during the summer -- of free classical music concerts.

To really get a feel for the city, though, you'll have to venture out of downtown. Chicago's residential neighborhoods all have their own look and atmosphere -- from the sophisticated Gold Coast to low-key Lakeview, or the boisterous Wrigleyville-- home of Wrigley Field. Old Town (site of the some of the city's oldest homes), Bucktown/Wicker Park, and the Armitage Avenue area all make good daytime strolls, with ample shops, cafes, and restaurants for when you want to take a break.

Lincoln Park (200 N Stockton Dr), which stretches along Lake Michigan for miles, turns into Chicago's own beach resort come summertime. The pretty people pose at Oak Street Beach and play volleyball at North Avenue Beach, while throngs of bikers, skaters, and walkers vie for space on the paved lakefront paths. Don't count on swimming while you're here (the water is usually freezing, even in August), but no matter what the weather, a stroll along the lake is the perfect wind-down after a busy day.

Families should take a detour to the Lincoln Park Zoo (2200 N Cannon Dr), notable not just for its picture-perfect location, but for its accessibility: not only is it open every day of the year, it's also free. That makes it a favorite of local parents and kids, whom you'll see smiling at the playful chimps in the Regenstein Center for African Apes or scrambling on board a giant John Deere truck inside the Farm in the Zoo.

Buckingham Fountain (Columbus Drive and Congress Parkway in Grant Park) features 133 jets spraying 14,000 gallons of water as high as 150 feet every minute. Every hour on the hour, there's a 20-minute water display accompanied by lights and music at dusk. You might recognize Kate Buckingham's creation from the opening credits of the popular 1990s TV sitcom, "Married With Children."

Despite their decades-long losing streak, the Cubs sell out almost every game, unlike the much-more-talented White Sox. Why? Because they play at Wrigley Field, an old-time ballpark far more charming than the White Sox's sterile U.S. Cellular Field. The scene around Wrigley at game time is worth checking out for any sports fans. Just avoid driving to Wrigley; parking is limited because the ballpark is wedged into a bustling neighborhood and you'll be towed if you don't have a residential permit sticker. Instead, pay $5 to board the double decker bus at Hilton Chicago (720 S Michigan Ave), Tribune Tower (435 N Michigan Ave), and the Old Water Tower (806 N Michigan Ave). You can also get to the ball park on a number of El lines or CTA buses.

Cub fans of all ages swarm the blocks around the ballpark hoping to catch a stray ball, while souvenir vendors hawk the latest Cubs-related gear; the revved-up atmosphere is infectious. If you don't have tickets, you can watch the game on big-screen TVs at the traditional neighborhood tap of John Barleycorn's (3524 N Clark St) or plasma screens in the 4 am joint called Big City Tap (1010 W Belmont St), which both serve good food and manage to avoid the frat-party vibe of other taverns in the area. The Cubby Bear (1059 W Addison St) is a famous landmark across the street from the ballpark and is "the place" for Cubs post-game parties, and Trader Todd's (3216 N Sheffield) offers drink specials to Cubs fans who bring their ticket stubs on game day.

White Sox fans usually get to "The Cell" (which replaced Comiskey Park -- a name referred to still fervently by many locals, be they Sox fans or not) early because a bunch of activities, like running the bases in the 15,000-square-foot FUNdamentals area or getting a great view of the field from the Fan Deck, are offered for the young and young-at-heart.

Others tailgate grilling burgers and brats for two hours before the game in Lots A through F surrounding the stadium. If you need a beer or good food after the game, head to Schaller's Pump (3714 S Halsted St) for corned beef and cabbage and an assortment of whiskeys or Punchinello's (234 W 31st St), which has two indoor bars, six wide-screen TVs, and a spacious beer garden that holds about 70. First Base (3201 S Normal Ave) is a cozy neighborhood bar northwest of the park and good place to rub elbows with fans.

Chicago is a great place to see fine art at museums such as the Art Institute of Chicago. The city's performing arts scene -- including the Chicago Symphony Orchestra, the Lyric Opera, and the Steppenwolf Theatre Company -- also can't be beat. Keep reading to learn more about arts and culture in Chicago.