Getting In, Getting Around Chicago 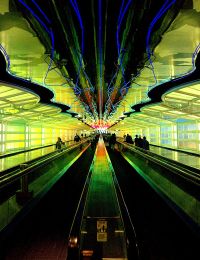 ©2006 Today Is A Good Day Chicago's O'Hare International Airport has some unusual artwork, including this walkway with its neon lights and new-age music.

Navigating Chicago might seem daunting, but visitors will find that they have many options. The public transportation system includes a network of trains and buses, and driving in Chicago is relatively straightforward.

Chicago has two airports -- sprawling O'Hare International Airport on the northwest edge of the city and smaller Midway Airport southwest of downtown.

Rental car: All the major rental-car companies are represented at both O'Hare and Midway. At O'Hare, customer-service counters are located in the baggage claim areas of all three terminals. Shuttle buses, which stop directly outside baggage claim, carry customers to off-site parking lots, about a five-minute ride away.

At Midway, agencies also have customer-service counters adjacent to baggage claim. To get to your car, you'll have to walk to Level 2 of the attached Parking Garage.

Taxi: You'll have no problem hailing a cab at either O'Hare or Midway, both of which have designated taxi stands outside the baggage claim areas. There are no flat rates. You'll be charged the standard Chicago taxi rate of $2.25 for the first mile and $1.80 for each additional mile. Expect to spend about $25 to $30 for a cab from Midway to downtown and about $35 to $40 to get downtown from O'Hare. If you're going to a central location and would like to save money, taxi dispatchers on-site will help you arrange a shared ride.

Public transportation: The "El" system is a network of color-coded train lines that connect downtown to surrounding residential neighborhoods and both airports. The Blue Line runs from O'Hare and the Orange Line from Midway. The trip from O'Hare takes about 40 minutes, while the ride from Midway runs about half-hour. The El costs $2 per ride, and you can buy fare cards from vending machines at the front of each station.

Continental Airport Express runs shuttle buses on regular schedules from both airports. A ride from O'Hare to downtown costs $24, and $20 from Midway. Shuttle buses pick up passengers directly outside the baggage claim areas at both airports.

Rush hour: Whether you rent a car from the airport or drive in to Chicago on your own, navigating the city is fairly straightforward, thanks to a series of major highways that lead into downtown from the north, south, and west. That said, be prepared for frustrating delays on those highways at rush hour times, basically 7 am to 9 am and from 4 pm to 7 pm weekdays. Plan your arrival for a weekend or mid-day to avoid some of the worst traffic jams during the week.

If you have extra time, take the scenic way into downtown by mapping a route along State Road 41, which will bring you into the city via Lake Shore Drive, and you'll have a view of Lake Michigan on one side and the city skyline on the other.

Rules of the road: Driving in Chicago can be competitive, so be prepared to get cut off on highways and major streets by aggressive drivers in a hurry (taxis can be especially unpredictable). Local drivers tend to speed up to get through yellow lights, so make sure you're not being followed too closely as you slow down at intersections. Making a right turn on a red light is legal in this city, unless otherwise posted. Drivers in left turn lanes tend to take liberties even after the light has turned red, so beware of impatient drivers who don't like to wait for the next chance to turn.

Public transportation/fares: Chicago's grid of north-south and east-west streets and logical system of address numbers makes finding your way around fairly easy The only complication: The occasional diagonal avenue that cuts through the grid of horizontal and vertical streets. Chicagoans often give directions by telling you to head north or south, which can be confusing to out-of-towners. The key is to always keep track of which direction Lake Michigan is, which will help you keep your bearings. (If the Lake is to your right, you're heading north, and if it's to your left, you're heading south.)

Public transportation in Chicago is reliable and extensive, including trains and buses that cover most of downtown. The El train system is a network of color-coded train lines (some elevated and some underground) that connects The Loop with surrounding residential neighborhoods. Check train schedules for hours of operation since not all lines run 24 hours. Some lines are undergoing renovation so service may be down or certain stops may be closed. Time Out Chicago has an up-to-date bulletin on El schedules and routes, and also includes detailed public transportation directions to attractions, restaurants and nightlife throughout the city.

Buses run regularly throughout downtown (the stops are marked with blue-and-white signs). Commuter trains provide a quick, pleasant ride to the surrounding suburbs. The fare on trains and buses is $2 each way; buses will not give change, so be prepared to pay the exact amount. Visit the Chicago Transit Authority Web site for maps and route information.

Taxis, on foot, or by bike: As in other big cities, taxis are helpful (and readily available) if you need to drag heavy luggage to your hotel or get across town relatively quickly at night.

You can flag down a taxi relatively easily throughout downtown Chicago. If you have trouble spotting one, you should head for a major thoroughfare such as Michigan Avenue or State Street. Taxis charge $2.25 for the first mile and $1.80 for each additional mile.

If you're staying downtown and visiting the city's main museums, you can get around quite easily by walking. Many of the best museums and restaurants are within walking distance of The Loop and Michigan Avenue.

Biking is a popular summer hobby along the lakefront bike paths. Bike Chicago has rental stands at North Avenue Beach, Navy Pier, and Millennium Park if you feel like pedaling as you enjoy the view.

Personal or rental car: If you decide to rent a car to get around during your stay or drive in to the city, be aware that day time and overnight parking rates in the downtown area can be high, although many hotels offer discounted rates to guests. Be sure to check street parking signs especially if you opt for on-street parking overnight and even during the day. There are many intricate parking regulations, such as no parking on major streets if there is more than two inches of snow; no parking on the south side of major streets from 7:00 to 9:00 a.m. and on the north side from 4:00 to 6:00 p.m.; street cleaning from 9:00 to 3:00 p.m. once a month.

Also, be sure to carry a roll of quarters for metered parking. Although not easy to find, especially downtown, you can save a bundle over garage parking rates, but beware that most metered parking spots have a two-hour limit. The City has an aggressive parking violation patrol, and taking chances is just not worth the excessive fines if you break a rule and get caught. Also, be very cautious not to park in private parking lots that have "Violators Will Be Towed" signs, yellow tow zones or near fire hydrants. It takes only a few minutes for a tow truck to be dispatched, and the fines to get the car out of impound are upwards of $100, plus you may also have to pay a parking ticket.

You'll find no shortage of special events in Chicago, including the Taste of Chicago, the Blues Festival, and the Jazz Festival. On the next page, learn about Chicago's many summer festivals and its world-class attractions.