by Elizabeth Blackwell
NEXT PAGE 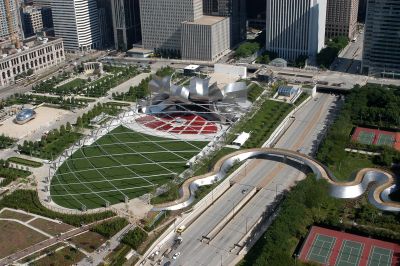 You may think you know Chicago: a hard-working, no-nonsense city where bratwurst-toting football fans cheer on "Da Bears" despite bone-chilling winter winds. Guess again. This Midwestern metropolis has reinvented itself as a truly cosmopolitan destination.

International visitors flock to the city's world-class museums while snapping shots of the skyline (modern architecture was born here, after all).

High-maintenance fashionistas hit the big designer names and shops on Michigan Avenue before heading to more cutting-edge, off-the-beaten-track boutiques in Bucktown. And those in search of eye candy can take in the buff young professionals biking, running and skating their way along the Lake Michigan shoreline -- or, better yet, hit the bike path themselves.

Despite the city's new coat of veneer, the low-key, not-easily-impressed Chicago spirit has survived intact. Although the city has something for everyone -- from families in search of a thrill at the Navy Pier Ferris wheel to couples strolling hand-in-hand along Oak Street Beach -- it doesn't rest on its laurels. Chicago is still eager to please, anxious to convince visitors that it deserves more than its "Second City" status. Come to the city with an open mind, and you'll be pleasantly surprised.

The Best of Chicago

As the cultural and commercial center of the Midwest, Chicago attracts both leisure and business travelers, and has attractions to fit pretty much any interest. At the top of any visitor's must-see list are the city's top museums, many of which are internationally renowned. The Art Institute of Chicago is known particularly for its collection of French Impressionist masterpieces, although you'll also spot some iconic works of modern art as you wander the halls (Edward Hopper's Nighthawks; Grant Wood's American Gothic).

The Field Museum of Natural History and the Shedd Aquarium (within walking distance of each other on the city's Museum Campus) can each easily fill a day, while the massive Museum of Science and Industry in the south side neighborhood of Hyde Park is heaven for children who like their exhibits flashy, fun, and interactive.

Chicago's architecture is another draw. A walk through downtown is a mini-tour through the history of the high-rise office skyscraper, from the 1890s-era Reliance Building (now The Hotel Burnham) to the stark lines of the mid-20th-century International Style, epitomized by the Sears Tower and John Hancock Center.

But some of Chicago's greatest attractions are natural rather than man-made. The shores of Lake Michigan, lined by miles of public parks, are Chicago's summer playground, the site of everything from family picnics to pickup beach volleyball games to weekend 5-kilometer runs. From Grant Park and Millennium Park downtown to Lincoln Park further north, Chicagoans fill these outdoors spaces come spring, summer, and fall, eager to take advantage of every sunny day. To truly experience the spirit of the city, you should spend time hanging out there, too.

©2006 Chicago Convention and Tourism Bureau When at Chicago's Field Museum of Natural History, be sure you pay a visit to Sue, the largest and most complete Tyrannosaurus rex fossil yet discovered.

Geography and landscape: Chicago is located at the northeastern tip of the state of Illinois, along the southwestern curve of Lake Michigan. The Chicago River runs through the heart of downtown, splitting into a North Branch and South Branch at Wacker Drive. The Chicago metropolitan area, and capital of Cook County, is home to about 8 million people, and its suburbs spread for miles to the north, south, and west.

Like most of the Midwest, Chicago's topography is flat. You won't be climbing any hills during your visit. That makes walking relatively easy; indeed, it's the best way to get a feel for the city while you're here.

General orientation: The heart of Chicago's downtown business district is The Loop, named for the elevated train tracks ("the El") that circle overhead through the area. Michigan Avenue is the city's best-known thoroughfare; the one-mile stretch between the Chicago River and Oak Street Beach, known as The Magnificent Mile, is downtown's most popular shopping destination.

©2006 Chicago Convention and Tourism Bureau Chicago's Buckingham Fountain, in the lakefront Grant Park, was built in 1927.

To the north of downtown are the residential neighborhoods of the Gold Coast, Old Town, Lincoln Park, Lakeview, and Wrigleyville. To the west of downtown, the West Loop is a newly gentrified area of rehabbed loft apartments and trendy restaurants. Also booming is the South Loop, site of many recent residential construction projects.

Aside from the neighborhoods surrounding downtown, Chicago is a network of distinct neighborhoods, some named for parks (Wicker Park, Humboldt Park, and Albany Park to the west, Rogers Park to the north) while other areas are named for the immigrants who settled there, such as Ukrainian Village, Greektown, Little Italy, Chinatown. That said, Chicago is a diverse city, considered home to the many who settle here in search of the American Dream.

All Chicago address numbers originate at the corner of State and Madison streets in The Loop (the city's "point zero"). Each increment of 400 in an address translates to a half-mile (800 W Madison St, therefore, is one mile west of State Street). While the city's grid system is fairly simple to follow and the downtown skyline and Lake Michigan that lines the eastern edge of the city can help re-orient you if you get lost, there are a few major streets that run at a northwest angle (Lincoln, Milwaukee, Clybourn, Elston) and can cause confusion if you're not sure what direction you're headed.

Safety: Although crime is rare in Chicago's busy downtown, visitors should use the same precautions they would in any other large city. Purses, cameras, and other valuables, in particular, can be easy targets for pickpockets. Downtown neighborhoods with busy bar and restaurant scenes -- such as The Loop, River North, and The Magnificent Mile -- are safe well into the evening hours.

Although some unsafe neighborhoods are off the usual tourist path, drivers should exercise precautions when driving through unfamiliar parts of the city and map out their route before driving. As in other major cities, it's safer to stay in well-populated areas and keep from venturing into unfamiliar neighborhoods and dimly-lit parks at night.

Climate/weather: Don't like the weather when you arrive in town? Wait an hour -- it will probably change. Chicago runs the gamut of temperatures, from frigid winters to steamy summers, but the most predictable aspect of Chicago's weather is its unpredictability. Whenever you visit, come prepared to dress in layers. That said, there are some general guidelines: winter high temperatures are usually in the 20s or 30s (Fahrenheit), with gusty winds off the lakefront (the phrase "cooler by the lake" is something you'll hear repeatedly).

Summers can be scorching, with temperatures in the 80s and 90s (Fahrenheit) and high humidity, although heat waves are usually broken up by periods of pleasant, less-sticky weather. Spring is unpredictable: it could be 70 degrees and sunny or 40 degrees and raining, so be prepared for extremes. The most consistently pleasant weather is in the fall, with low humidity, ample sunshine, and temperatures in the 60s and low 70s.

Finding your way around Chicago is easy enough, considering how large the city is. Keep reading to learn about getting around Chicago via rental car, taxi, or public transportation.